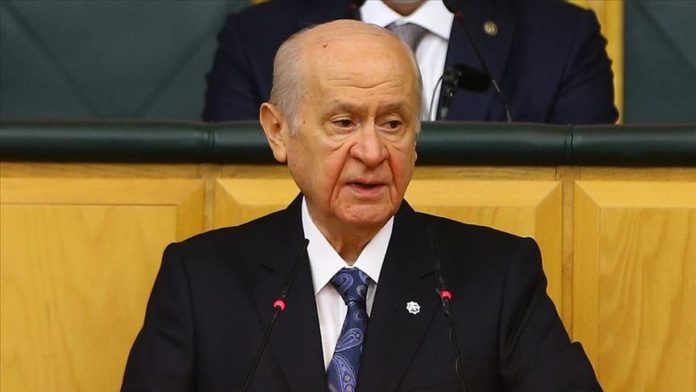 A prominent Turkish party leader on Tuesday urged NATO Secretary General Jens Stoltenberg to warn Greece over its transgressions in the Eastern Mediterranean.

Greece’s unfair moves should be officially discussed in Brussels, Devlet Bahceli, leader of the Nationalist Movement Party, told his parliamentary group, referring to the Belgian capital where the inter-governmental military alliance is headquartered.

“Turkey will not negotiate its interests,” he said, calling on Athens to avoid testing Ankara’s patience.

Turkey – the country with the longest coastline on the Mediterranean – sent out drill ships to explore for energy on its continental shelf, asserting its rights in the region as well as those of the Turkish Republic of Northern Cyprus.

Greece has made maximalist maritime territory claims in the region based on small islands near the Turkish coast in defiance of international law.

Turkey has stressed dialogue to reach fair sharing of the region’s resources, and military delegations from both sides are engaged in a series of NATO-hosted technical talks since Sept. 10.

Meanwhile, about the ongoing tensions in Upper Karabakh, Bahceli said Armenian attack on Azerbaijan is tantamount to attacking Turkey.

“The only solution in the southern Caucasus is Armenia’s unconditional withdrawal from occupied territories,” he said.

Azerbaijan’s sovereignty should be affirmed in Upper Karabakh, Bahceli asserted. “There is no other remedy, no other choice and no other solution.”

New clashes erupted on Sept. 27 but international calls for a halt to fighting have gone unanswered. Armenia has continued its attacks on civilians and Azerbaijani forces, who are the rightful owners of the occupied region, as recognized by the UN.

Those threatening Turkey with sanctions will be disappointed: President