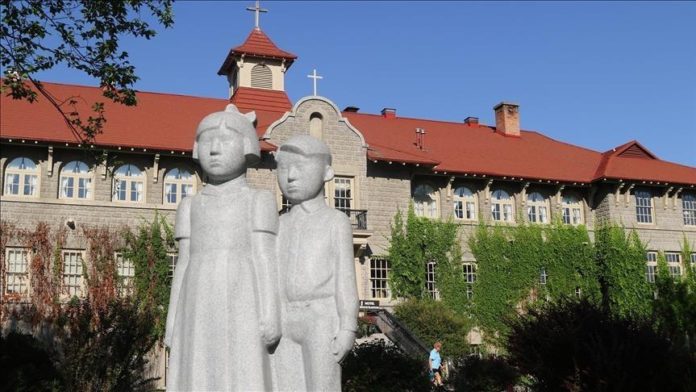 Ione Quigley has vague memories of her grandfather, a member of the Rosebud Lakota Sioux Tribe in the US state of South Dakota.

But she knows one thing: she would not be alive today if he had not survived being forcibly removed from his home, a kidnapping, essentially, to a Christian boarding school in the state of Pennsylvania in the late 1800s.

“He didn’t talk too much about it (but) they had him training horses” for the white people at the school, Quigley recalls, which is probably why he made it out alive. Thousands of other children never came back, killed by disease or abuse. About 2,000 are still missing.

Quigley, now a grandmother herself, has spent the last five years trying to figure out how to get at least some of the boarding school victims home to Rosebud, more than a century after their deaths.

And on Saturday, that odyssey came to a close with a re-burial — a repatriation — of nine victims on tribal land, the largest repatriation of Native Americans so far from the dark history of America’s Indian boarding schools.

-‘Kill the Indian, save the child’

Starting in 1879, the American military started rounding up thousands of Native American children, taking them from their homes and shipping them off to about 357 boarding schools, in an attempt to “tame” them. “Kill the Indian, save the child” was the mantra from the military as the children were forced to cut their long braids, a significant part of their culture, dress in uniform, speak English and adopt European names.

“These young ones left a big hole in their families,” Quigley told Anadolu Agency this week. “Mothers wondering where were their children were. Imagine the historical trauma that comes from that.”

And the Carlisle Indian Industrial Boarding School in southeast Pennsylvania, 1,400 miles from the Rosebud Sioux Reservation, was America’s flagship boarding school until it closed in 1918.

In 2015, a Rosebud Sioux tribal youth council traveled from South Dakota to Washington D.C. for a conference with other tribes and on the road trip home, decided to visit Carlisle.

The visit left a deep impact on the children who realized they were about the same age as Carlisle’s victims. On their return home, Quigley says, the children asked the Tribal council: “Why are they still there, why are they not home?”

The tribe enlisted the help of Quigley, the tribal historian, and Peter Gibbs, an Englishman who is the former curator of Native American art for the British Museum. His Lakota Sioux wife brought him to Rosebud in the early 1990s and he had already established a database of tribal history.

“It would take three days to describe” the forensic detective work he used to try to identify Carlisle’s victims and find them,” said Gibbs. “So many avenues to go down, so many dead-ends.”

Besides dealing with children whose names were changed upon arrival in Carlisle, records and gravesites were poorly marked, some labeled as just “Sioux,” even though there are seven Sioux tribes in America.

Quigley said the Army Corps of Engineers, which has jurisdiction over military gravesites, was a welcome partner in the effort.

“We made a really strong bond. They were a really good team to work with,” she said.

The US Bureau of Indian Affairs, she said, was a different story.

“They just didn’t open the records to us. It was just bureaucracy. So frustrating.”

“The government didn’t want to help us,” added Gibbs, who said the boarding school scandal, long known to Native Americans but mostly unknown to everyone else, will only get worse. “Too many implications there.”

But Gibbs felt guided by the spirits of children for whom he was searching.

“No one would believe me,” he said, but “I knew the spirits of those kids were with me, I knew the kids in that cemetery wanted to come home.”

He recalls how one day, he was staring in frustration at his computer inside the Tribal Historic Preservation Office, trying in vain to find an online 1927 map of the Carlisle gravesite.

Suddenly, two other computers in the room, with no power, switched on, straight to the internet, bypassing the password requirement. “Yikes,” he recalled, as he went to check out the computers. When he returned to the first computer, the map he had been looking for was suddenly staring back at him.

“Don’t ask me how it got there. I firmly believe the kids were going to do everything they could to give me the help to get them out,” he said.

For all their frustrations, Quigley and Gibbs have a powerful new advocate in Washington D.C.: US Interior Secretary Deb Haaland, a Native American, who came to office with the Biden Administration.

Last month, after the discovery of more than 200 gravesites at a boarding school in Canada, Haaland announced that her agency would launch an investigation to identify America’s indigenous boarding school victims.

“I was sick to my stomach,” after hearing of the Canadian gravesites, Haaland wrote in an opinion piece for the Washington Post. She revealed that she, too, had grandparents who were “stolen” and forced into boarding schools from ages 8 to 13.

Haaland’s announcement targets exactly what made Quigley’s and Gibbs’ jobs so difficult: finding and identifying burial sites and victims.

“It won’t undo the heartbreak and loss we feel,” Haaland said in a statement. “But only by acknowledging the past can we work toward a future that we’re all proud to embrace.”

The process of actually removing the victims from their gravesites was emotionally draining for Quigley.

The graves had been moved once already, to a site away from the Carlisle school and Quigley said she felt extreme anger and sadness as she realized the pine box caskets and the remains inside were a mess.

The remains were loaded into a caravan of vehicles that headed west this week toward Rosebud. And with each passing mile, under hazy, wide-open skies of the American west, and with increased media attention, it seemed as if the caravan got bigger.

Dozens of tribal motorcyclists wearing tribal orange colors, roared alongside as the caravan stopped for prayers with other tribes.

The caravan spent one night along the banks of the Missouri River for a traditional ceremony, filled with songs and drum-beating and nine teepees were erected. “Surreal” one tribal member, a young woman, called it.

By Friday, dozens of tribal members were running, marathon-style, alongside the procession.

Neither Quigley nor Gibbs accompanied the caravan from Pennsylvania this week, both sounding more exhausted than elated. Quigley said she had not been home in almost a month; Gibbs said he was taking a break.

Another tribe has already contacted him about finding more remains.

The Rosebud remains officially became the property of the Tribe on July 14, exactly five years to the day that Gibbs took on his assignment.

“The stress of the last five years has really been enormous,” he said, and there are still more Rosebud victims to be found, somewhere in Carlisle.

But for now, nine of them are home.

Saturday, in a brightly lit gymnasium, hundreds of members of the tribe gathered, full of pride, but at times emotionally describing what the repatriation meant.

“They all deserved better,” one young woman said at the microphone, through tears. “An emotional roller-coaster” another described it.

There were nine separate displays to honor the children, which included names, such as “Dora Her Pipe” and “Rose Long Face.” Traditional tribal chants and drum-beating welcomed them.

Later, the bodies were buried under a cloudless blue sky with a wide-open horizon at the Rosebud Sioux Veterans cemetery.

“Our belief system says that where ever you are born, is where your remains should go,” said Quigley, “it’s where your spirit should go.”

“We don’t believe in coincidence,” she said. “Everything is meant to be.”

France: Europe ready for dialogue with Turkey on E.Med