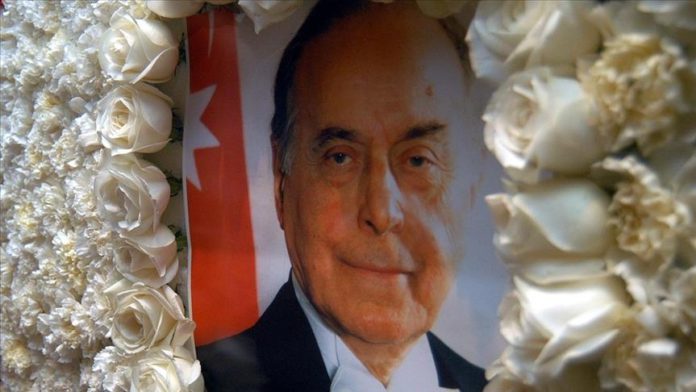 Azerbaijan on Saturday has commemorated the 17th anniversary of death of former President Heydar Aliyev.

Aliyev, who served at high-ranking positions in the Soviet Union, played a savior role for his country that had been facing the threat of civil war, the Nagorno-Karabakh fight, and economic crisis after independence.

He is commemorated with respect and gratitude in Azerbaijan and his people keep his memory alive as the “national leader”.

Aliyev was born on May 10, 1923, in the Nakhchivan Autonomous Republic of Azerbaijan.

He graduated from the Nakhchivan Pedagogical Technical School in 1939, then enrolled in the Faculty of Architecture of the Azerbaijan Industrial Institute, but could not complete his education due to the outbreak of World War II.

With his managers realizing his successful studies and analytical skills, he was hired by the SSCB State Security Committee (KGB) in 1944.

Then, he was appointed as chairman of the Azerbaijani KGB in 1967 and was given the rank of general.

He was elected as secretary general of the Central Committee of the Communist Party of Azerbaijan in 1969 and ruled Azerbaijan until 1982.

He was invited to Moscow and elected to the Politburo of the Central Committee of the SSCB Communist Party in 1982.

Aliyev was among 19 people who have a voice in the management of the SSCB and was appointed the first deputy chairman of the SSCB Council of Ministers the same year.

He resigned in 1987 in protest of the policies of Mikhail Gorbachev, politburo of the Central Committee, and the secretary of the Communist Party, then returned to Azerbaijan in 1990.

During the collapse of the SSCB, Aliyev could not stand indifferent to the problems of his country, and in 1990 he was elected a lawmaker both for the Azerbaijan Soviet Socialist Republic and the Nakhchivan Autonomous Republic.

Protesting the hypocritical policy of the SSCB administration against the land claims of Armenians in Nagorno-Karabakh, he resigned from the Communist Party in 1991.

Same year, he was elected president of the Nakhchivan High Council and became the deputy head of the Supreme Council of Azerbaijan.

When Azerbaijan declared its independence, he continued to serve in Nakhchivan and then founded the New Azerbaijan Party, the current ruling party, on Nov. 21, 1992.

Heydar Aliyev was invited to Baku by public to eliminate the threat of civil war, and he was elected the chairman of the Supreme Council of Azerbaijan on June 15, 1993.

He won the elections on Oct. 3, 1993 to became president and began to work hard to solve the problems of his country.

Taking the presidency during a difficult period of the war that began in 1991 in Nagorno-Karabakh and the occupation of Azerbaijani lands by Armenians, Aliyev started the job by strengthening the army.

In Bishkek on May 4-5, 1994, a protocol was signed between Azerbaijan and Armenia on a cease-fire and violent clashes stopped.

He used diplomatic maneuvers to suppress the uprisings of some forces who wanted to seize control illegally and put an end to the domestic disorder with the support of the people.

Aliyev lays base for economic growth

The Azerbaijani leader laid the foundation for the country’s economic development by signing the “Agreement of the Century” with 11 companies from seven countries, which envisages the operation of Azerbaijan’s largest oil field, the Azeri-Chirag-Gunashli (ACG) basin, and its export to world markets.

During his presidency, a constitution that reflects universal democratic values ​​was accepted with a referendum and he abolished the death penalty.

He reinforced the country’s position in the international arena by establishing good relations with the Turkic countries, especially with Turkey, as well as with Russia, the US, and the European countries.

With Karabakh liberated, his will fulfilled

Aliyev’s biggest desire was to liberate Karabakh from Armenia’s occupation and to ensure the territorial integrity of Azerbaijan, and he had bequeathed this to his son Ilham Aliyev.

The Azerbaijani Army under the command of President Ilham Aliyev fulfilled the will of Heydar Aliyev by saving its land from occupation.