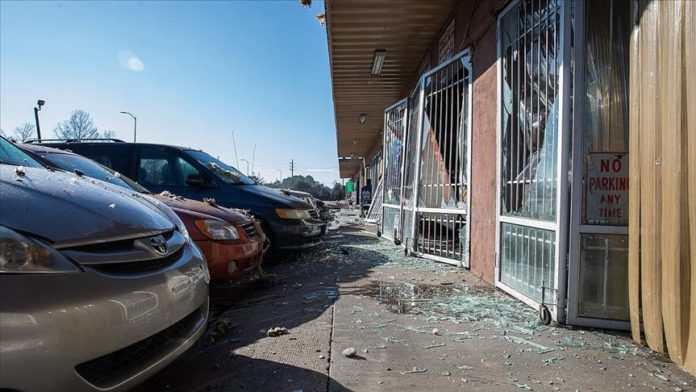 The girlfriend of the man suspected of carrying out a Christmas Day suicide bombing in Nashville, Tennessee warned officers in 2019 that he was building bombs in a recreational vehicle parked at his home, police said Wednesday.

Official records released Wednesday identify Anthony Warner’s girlfriend as Pamela Perry. Police responded to a call at her house on Aug. 21, 2019 after her lawyer reported that she was making suicidal threats as she sat on her front porch with two pistols that were eventually found to be unloaded, according to the documents.

Raymond Throckmorton, Perry’s attorney, told officers on the scene that Warner “frequently talks about the military and bomb making,” and said he believed Warner “knows what he is doing and is capable of making a bomb,” according to the documents.

Police were ultimately unable to speak with the suspect when they went to his residence later that day, and while they saw the trailer parked at his home they could not see inside the vehicle.

The Metro Nashville Police Department said in an accompanying statement that they had no authority to search the recreational vehicle, and that a report was sent to the department’s Hazardous Devices Unit.

Police then sent the report to the FBI on Aug. 22, 2019, and asked the bureau to check whether Warner had prior connections to the US military. They were told about a week later that “Department of Defense checks on Warner were all negative,” according to Nashville police.

Police said the hazardous device unit reached out to Throckmorton during the week of Aug. 26, and said “the recollection of that call is that Warner did not care for the police, and that Throckmorton would not allow his client to permit a visual inspection of the RV.”

The claim was quickly challenged by Throckmorton who said during an interview with the Tennessean newspaper he not only urged police to look into Warner, and while he represented the suspect in a civil matter years prior, he did not represent him in 2019 and did not tell police they could not search the vehicle.

“I have no memory of that whatsoever,” Throckmorton told the newspaper of the police’s claim. “I didn’t represent him anymore. He wasn’t an active client. I’m not a criminal defense attorney.”

DNA taken from the scene of this year’s Christmas Day bombing matched Warner, 63, according to state officials.

No one was killed in the blast front of an AT&T transmission building in downtown Nashville, but communications were severely disrupted in Tennessee and neighboring states.