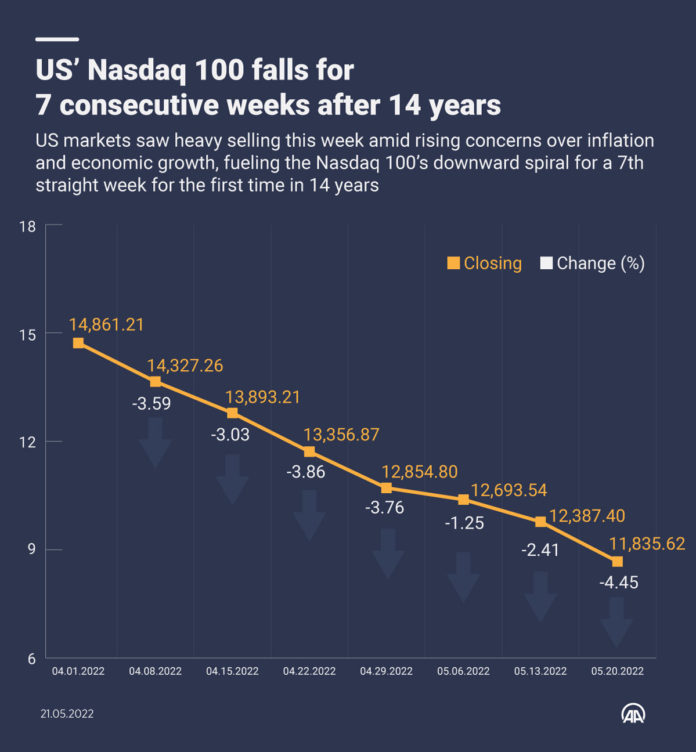 The tech-dominated Nasdaq 100 index dropped 4.45% on a weekly basis, continuing its downward spiral for the seventh straight week – a first in 14 years.

US markets saw heavy selling this week amid rising concerns over inflation and economic growth.

Dismal earnings reports from major retail chains such as Target and Walmart, an indicator of the walloping impact of soaring costs, have aggravated fears that the Fed would have to hike interest rates more aggressively, potentially dragging the economy into a recession.

These rising apprehensions, combined with the fallout of stringent pandemic measures in China and the uncertainty sparked by the Russia-Ukraine war, accelerated investors’ flight from risky assets.

Chairman Jerome Powell’s remarks this week clearly indicated that the Fed intends to continue with its aggressive rate hikes.

He said the central bank will pursue the policy until there is clear and convincing evidence of a drop in inflation levels.

The Dow Jones fell 2.90% on a weekly basis, the first time since 1923 that the index has declined for eight straight weeks.

Rising recession fears pushed stocks into a “bear market” for a short time, with the S&P 500 down 20% on Friday from the record high it hit in January.

The Nasdaq 100 has now seen seven straight weeks of losses. The index has fallen for eight consecutive weeks only twice – in March 2001 and October 2008, when the US economy went into recession.

In the first months of the COVID-19 pandemic, the Fed slashed the policy rate to the 0-0.25% range and started buying assets to support the economy.

While the central bank’s balance sheet almost doubled during the pandemic period, reaching approximately $9 trillion, inflation sparked by the rapid economic recovery since last year has forced the Fed to change its policy.

It started tapering asset purchases last November and ramped it up the next month.

This pushed the Nasdaq, which peaked to an all-time high of 16,625 points last November, into a gradual downward spiral.

At its March meeting, the Fed decided to raise interest rates for the first time since 2018, settling on an increase of 25 basis points.

The Nasdaq responded well to the rate hike and other dovish statements from the Fed, climbing from 13,100 to 15,265 points during March.

The increase of 50 basis points announced by the Fed at its May meeting was the steepest hike since 2000.

The Nasdaq 100 has not risen on a weekly basis since April, when the US saw monthly inflation of 0.3% and an annual rate of 8.3%.

The index has lost approximately 20% of its value in this period.

The US economy posted a surprise contraction of 1.4% in the first quarter of this year, fanning recession fears.

Coupled with soaring inflation, it has also sparked concerns of stagflation – the coexistence of stagnation and high inflation – in the world’s largest economy.