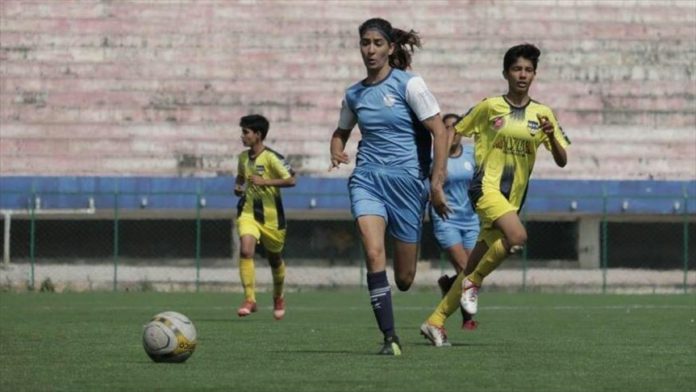 It has been more than 13 years of struggle and perseverance for Nadiya Nighat in Indian-administered Kashmir to become a football player and now a coach.

She assembles the cones, places a skipping rope, the checkered footballs and small goals to prepare for a training session, which she does often to train many young girls and boys in the region.

But it has never been easy for Nighat, a young female coach, to come so far, leaving behind her early struggles and taunts.

The 25-year-old had to challenge the perceptions and gender inequality ever since she took up playing football.

Scolded, rebuked but never gave up

In early 2007, 11-year-old Nighat used to play cricket with boys in her area at her residence in Srinagar, the capital city of Indian-administered Kashmir.

She was scolded by many people around her for being friends with boys, but Nighat vowed to prove them wrong one day.

“During those days, people around me used to pass unnecessary comments while asking my mother why she doesn’t stop me from playing with the boys. To be honest, I had only boys as friends, and I was very comfortable to play with them despite being a girl,” she told Anadolu Agency.

She recalled that whenever she used to return back home, her mother’s angry looks made her scared, but she still used to play with boys.

One fine summer morning in 2007, Nighat as usual went out to play. But this time, her friends told her they were going to practice football in a nearby playground at Amar Singh College and asked her to come along.

She did not know much about football except being an ardent fan of Cristiano Ronaldo, a Portuguese professional footballer who plays as a forward for Serie A club Juventus and captains the Portugal national team.

When Nighat saw boys practicing with the ball, she became curious and started doing the same. It was a local football coach out there who spotted Nighat and asked her to get training.

“I think it was luck which turned tides for me and I met Mohammad Abdullah, the first coach who trained me alongside 47 boys at his academy later on,” she said.

Since then, she has been playing football. But her first match as a professional footballer was in 2010, when she was selected for the under-19 national team, and then there was no looking back.

Recently, she played in an Indian league for the Bengaluru-based Parikrma Football Club as a striker.

Brought up in a middle class family, Nighat’s inclusion in the sport initially infuriated her family and relatives, but not anymore after what she has achieved.

“The insults, taunts and family pressure almost brought me down, but I never lost hope to keep trying at least, and today, I have reached a point where my parents are proud of me and those people who used to taunt me are requesting me to train their kids—This is an achievement if you have been able to change a mindset,” Nighat said.

Life as a coach

Nighat now is determined to lift young women in the region to chase their dreams with some support and professionalism.

She currently works as a head coach for women and an assistant coach for senior boys in a regional football club — Lone Star FC.

She says she wants everyone to chase their dreams, whether a girl or a boy, after becoming the first young female football coach in the troubled Himalayan region, which often becomes a flashpoint for nuclear arch rivals India and Pakistan.

She completed her first coaching course with the Jammu and Kashmir Football Association (JKFA) in 2015 and was soon training more than 40 children in different age groups.

In 2016, she trained the JJ7 football club’s boys’ team, who ended up runners-up to IFC Nowgam during the 32-Khelo Kashmir tournament.

It helped her get recognized in the male-dominated sport while getting her accolades for the training tips.

She continues to coach hundreds of boys and girls even if the coronavirus pandemic has restricted her to online demonstrations for her players.

“I want to train the budding players of the region so that they can try their mettle at the international level,” Nighat said. “What I have missed, I don’t want these budding players to miss it.”

US comedian Louie Andersen dead at 68 after battle with cancer