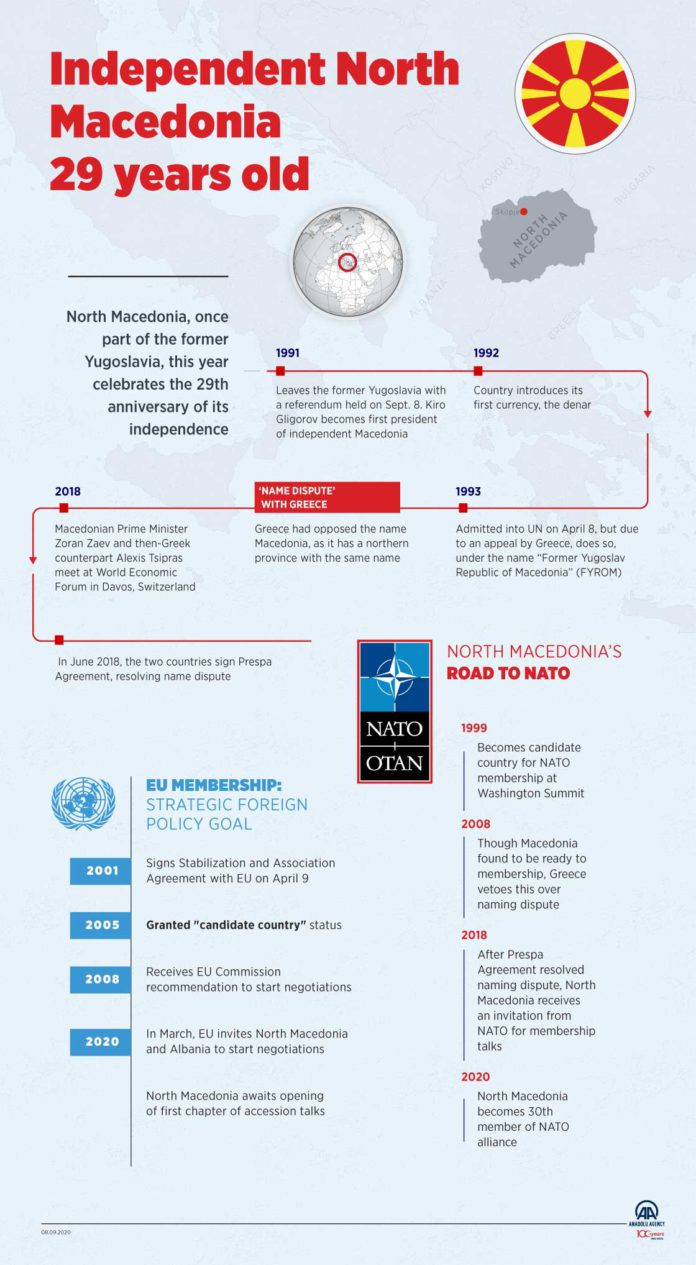 North Macedonia on Tuesday marked the 29th anniversary of its independence from the former Yugoslavia.

Formerly known as Macedonia, the country declared its independence as a result of a series of political uprisings and conflicts in the former Yugoslavia in the early 1990s.

In an independence referendum held on Sep. 8, 1991, an overwhelming 95.3% of the population voted for an independent Macedonia.

After this declaration of independence, Turkey, Bulgaria, Slovenia, Croatia, Russia, and Bosnia and Herzegovina recognized Macedonia as an independent state.

While Kiro Gligorov became the first president of independent Macedonia, on April 26, 1992 the country introduced its own currency, the denar, and formed its own army that August.

Macedonia’s international recognition was finalized in April 1993 when the country was unanimously adopted as a UN member at the UN General Assembly, but under the name the “Former Yugoslav Republic of Macedonia” (FYROM) due to an appeal from Greece.

Since its independence in 1991, Macedonia was unable to become a member of the EU or NATO due a name dispute problem with its southern neighbor Greece.

Greece, both a NATO and EU member, long opposed Macedonia’s official name, as it has a province also named Macedonia in the country’s north.

Resolving the name issue with Greece was one of the first conditions for opening the path to EU and NATO membership, the primary goals of Macedonia since its independence.

A referendum was held followed the signing of the June 2018 Prespa Agreement by the Macedonian and Greek governments, which required Macedonia to change its name to the Republic of North Macedonia and Greece to drop its objection to the country joining NATO and the EU.

“Are you in favor of NATO and EU membership, and accepting the name agreement between the Republic of Macedonia and Greece?” the voters were asked in the referendum.

During the referendum, 91.46% of the voters said “yes,” and the West hailed the vote.

Following the referendum, two-thirds or 80 of the 120 members of parliament in Macedonia voted in favor of the proposal.

Following resolution of the name issue, the gateway to North Macedonia’s NATO membership was opened.

In July 2018, North Macedonia got an invitation from NATO to begin accession negotiations, and in February 2019, NATO member states signed a protocol for alliance membership.

On April 9, 2001, North Macedonia signed the Stabilization and Association Agreement, which regulates its relations with the EU.

The country, which was granted candidate country status in 2005, received a recommendation from the EU Commission in 2008 to start negotiations.

Last October, EU heads of states and government did not approve the start of the enlargement process, a development then-European Commission President Jean-Claude Juncker called a “historic failure.”

At that time France criticized the enlargement procedure, while Denmark and the Netherlands were not satisfied with political reforms by Albania, another EU hopeful.

Based on these remarks, European Commissioner for Neighbourhood and Enlargement Oliver Varhelyi presented a revised methodology for enlargement in February.

The document introduced the possibility of speeding up the negotiations process in case of significant progress in certain policy areas.

At the same time, it enabled closed negotiation chapters to be reopened if the candidate country fails to deliver the promised reforms.

In March 2020, EU ministers reached a political agreement on opening accession talks with the Balkan nations of North Macedonia and Albania.

The Social Democratic Party of Macedonia (SDSM), in power since June 2017, made a pre-election alliance with the center-right ethnic Albanian BESA Movement, the Liberal Democratic Party, as well as representatives and parties of the Turkish, Bosniak, Roman, Ulah, and Serbian communities.

The new government set EU membership as a strategic goal after NATO membership and also aims to successfully combat the COVID-19 pandemic, establish functional institutions that the public can trust, stop the migration of the young population from the country, provide people with a better standard of living, and ensure both political and economic stability.