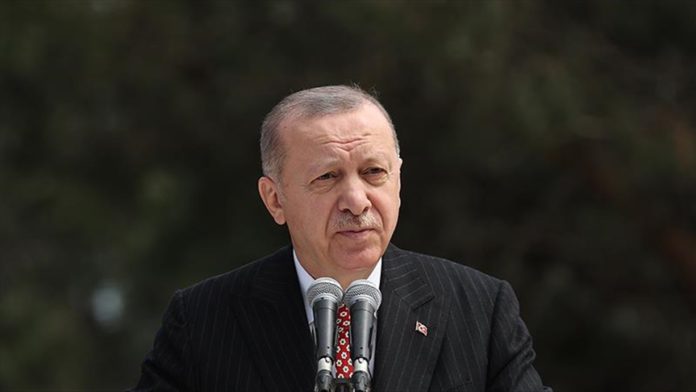 An operation launched on Friday night against terrorists in northern Iraq aims to completely eliminate the terrorist threat along Turkey’s southern borders, said the Turkish president on Saturday.

“This operation, carried out with respect for Iraq’s territorial integrity, will contribute to the establishment of peace and security in the region,” Recep Tayyip Erdogan said via video link to the Operations Pence-Simsek and Pence-Yildirim command center.

“We are determined to eradicate terrorism and completely free our citizens from the scourge of terror,” he said.

He underlined that Turkey now, as ever, is continuing its fight without the slightest deviation from human values such as rights, law, and justice.

‘No place for terrorists’

Stressing that Turkey aims to rid its southern borders of terrorism against efforts to establish a terrorist presence there, he said the Turkish military’s recent successful operations at the heart of terrorism show this goal is drawing near.

There is no place for separatist terrorist groups in the future of Turkey or neighboring Iraq or Syria, said Erdogan.

In line with Turkey’s rights under international law, it will continue its fight until it eradicates the murderers that bring nothing but blood, tears, and destruction to our region, he added.

Turkey’s domestic and national defense industry products are being extensively used in the successful operations by Turkish forces, he said.

So far in the operation, many terrorists have been neutralized and multiple shelters and caves destroyed, he added.

In its more than 35-year terror campaign against Turkey, the PKK – listed as a terrorist organization by Turkey, the US and the EU – has been responsible for the deaths of nearly 40,000 people, including women, children and infants.