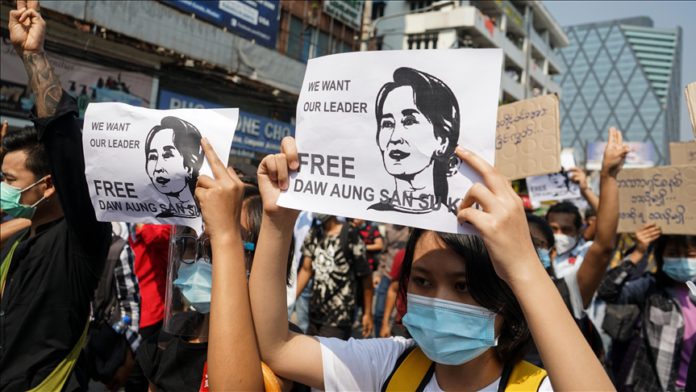 Civil disobedience and opposition in Myanmar to the military junta is growing and the political crisis is deepening, according to a recent report by the Arakan Rohingya Union (ARU).

“The political crisis in Burma is deepening as the civil disobedience movement and opposition to military rule intensifies,” the report said, using another name for Myanmar.

“While the situation in most parts of Arakan/Rakhine State remains relatively stable, new developments are emerging on the ground,” it said.

It went on to say that as public opposition to the military coup escalates throughout the country, the outcry against the Rohingya genocide continues to grow.

According to the report, Win Myat Aye, the minister of social welfare, relief and resettlement under the former National League for Democracy-led government, issued a statement acknowledging the military oppression and apologizing to Rohingya Muslims.

The report also said that 16 organizations have issued statements in the past two weeks regarding the Myanmar military’s treatment of the Rohingya.

The report noted that the military had hired Ari Ben-Menashe, a Canadian-Israeli lobbyist, and his firm to represent the junta internationally.

“Ben-Menashe reportedly said he was tasked with contacting Saudi Arabia and the United Arab Emirates to get support for a plan to repatriate Rohingya refugees from camps in Bangladesh,” the report said.

A fire that broke out earlier this month in a Rohingya refugee camp in Bangladesh killed at least 11 people and around 400 others remain missing while 45,000 refugees were displaced, the report said, adding the UN allocated $14 million in emergency funds to help those who were left homeless.

The ARU said in the report that at least six cases of fire incidents were reported within a week and it was concerning that the evidence pointed to arson.

The report said the tripartite deal signed by Myanmar, China and Bangladesh should be implemented in a timely manner, conducive conditions should be created in the respective townships and villages of potential Rohingya returnees, all remaining mosques in Arakan should be allowed to reopen and Rohingya victims of trafficking should be released from detention centers and returned to their places of origin.