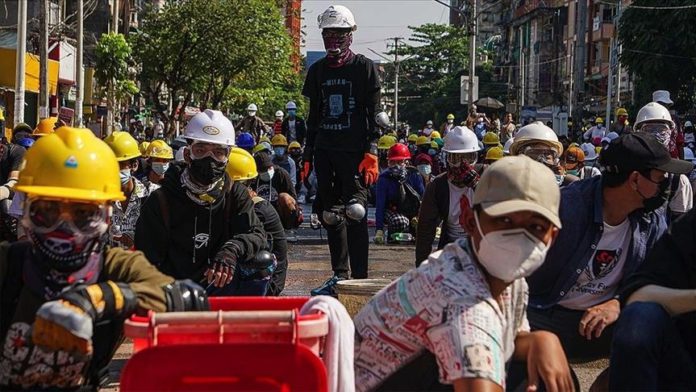 Residents of Myanmar’s commercial hub Yangon took to the streets once again on Monday night after security forces attempted to arrest protesters trapped in a major site of demonstrations against last month’s military coup.

Despite a night-time curfew, people in several townships of Yangon demanded the withdrawal of security forces blocking the protesters in the Sanchaung township, one of the city’s major protest areas.

Local media reports and residents have said more than 200 protesters were stranded in Sanchaung after security forces blocked the streets leaving the area on Monday.

Security forces announced on loudspeakers that action would be taken on residents who failed to register overnight guests in their apartments.

In response to the move widely viewed as an attempt to arrest stranded protesters, people gathered on the streets in defiance of the curfew and ban on public gatherings.

Ko Ko Haty, a resident in Lanmadaw township, said they were aware of the risks of venturing out onto the streets at night.

“On the pretext of the curfew, they [troops] might shoot us, but we can’t simply let them arrest the protesters,” he told Anadolu Agency over the phone.

“If we let that happen, our turn will be next.”

Local media have reported that people in at least 12 of Yangon’s 33 townships were protesting the security forces.

The UN and many foreign embassies in Yangon have called on the security forces to let protesters return home safely.

Over half of EU adults have received COVID-19 booster shots