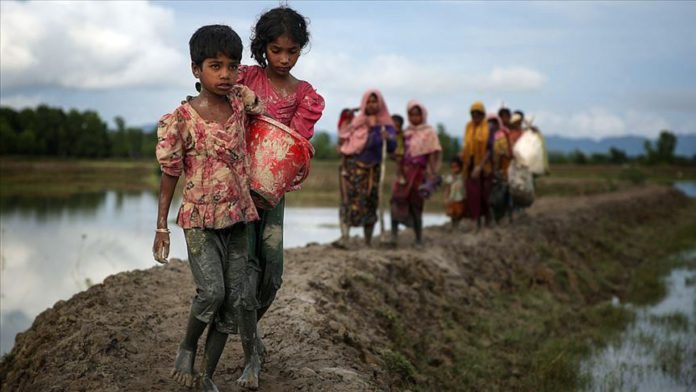 Myanmar is under fire for the conviction of a popular Burmese poet under the country’s Peaceful Assembly and Peaceful Procession Law.

The poet, Maung Saungkha, reportedly hung a banner from an overpass saying: “Is the internet being shut down to hide war crimes and killing people?”

According to analysts, the banner referred to the internet blackout in the states of Rakhine and Chin, where “numerous instances of suspected human rights violations” have been reported during ongoing conflicts between the Myanmar military and the Arakan Army, an ethnic armed group.

Speaking to Anadolu Agency, Saungkha said: “I see the verdict as restricting free speech through unjust laws and legal provisions, and threatening to prevent further protests.”

“Maung Saungkha’s case is one of many examples in recent years of worsening restrictions on free speech since the National League for Democracy [NLD] took power,” the UK-based Burma Human Rights Network (BHRN) said in a statement Saturday.

The statement called on the international community “to utilize all tools at their disposal to apply pressure to the Burmese government and military to reform in a way that benefits their people and not those clinging to power.”

“The government’s national reconciliation plan, which is trying to appease the genocidal military, jeopardizes the universal declaration of human rights to which Burma is a state party. Maung Saungkha’s case is one example,” Win told Anadolu Agency.

Calling Myanmar’s current regime a “hybrid government,” Maung Zarni, co-founder of Free Rohingya Coalition and Forces for Renewal of Southeast Asia, asked: “Is there any nefarious reason behind the internet ban in Rakhine state by the Suu Kyi-military hybrid government?”

“But his simple question, written on a banner, obviously became such a threat to Myanmar because the hybrid regime in power in Naypyidaw knows that it is under close scrutiny by UN Human Rights investigators, human rights activists, as well as UN bodies such as the International Criminal Court, the International Court of Justice [ICJ], and the Independent Investigative Mechanism for Myanmar,” Zarni added.

Zarni said: “He [Saungkha] got off lightly with a small fine or two weeks behind bars for two possible reasons: because he is a Buddhist and high-profile dissident poet and because Myanmar authorities want to signal to the International Court of Justice that it is not jailing critics of its policies towards communities in Rakhine state, particularly the Rohingya, in compliance with the ICJ’s Provisional Measures in the ongoing Gambia vs Myanmar genocide case” concerning the genocidal campaign that started in August 2017.

“But the fact that Myanmar charged, tried, found guilty, and sentenced a well-known poet and human rights activist itself speaks volumes about the complete absence of normalcy in Myanmar,” he argued.