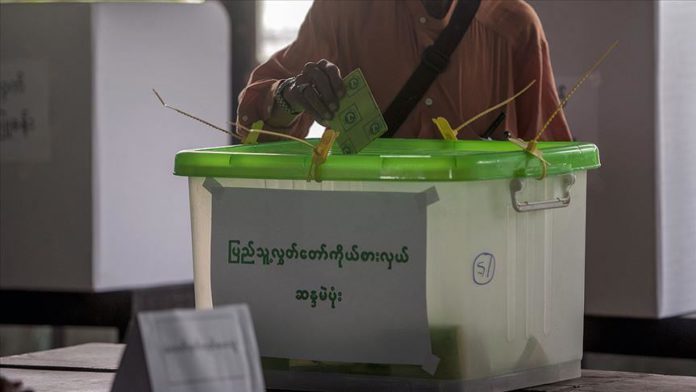 Millions of voters will cast ballots Sunday in Myanmar’s second general election since the end of nearly 50 years of military rule in 2011.

Polls will be held in the backdrop of concerns about oppression of opposition parties and the disenfranchisement of minorities, including the persecuted Rohingya community.

With 1,171 national, state and regional seats up for grabs, Aung San Suu Kyi’s ruling National League for Democracy (NLD) — that claimed 2015 polls by a landslide – is largely expected to win.

Myanmar’s bicameral parliament, Pyidaungsu Hluttaw, is divided into the Amyotha Hluttaw, the 224-member House of Nationalities or upper house – and the Pyithu Hluttaw, the lower House of Representatives with 440 seats.

More than 37 million voters from a population of 56 million will decide the fate of candidates representing more than 90 parties.

The military-backed Union Solidarity and Development Party, or USDP, is the main opposition to Suu Kyi’s NLD.

In the past five years, Suu Kyi lost the cooperation of ethnic minority parties because she failed to come through with an agreement giving ethnic minorities greater political autonomy.

During the run-up to elections, Myanmar faced severe criticism for oppressing opposition, including journalists, student protestors and denying voting rights to Rohingya.

In a statement, the UN said the military “is using the Penal Code, enacted by the British in 1861, to lock up journalists, students, and others for exercising their basic right to free expression.”

“Their crime? Their willingness to criticize the government and military,” said Tom Andrews, UN special rapporteur on the human rights situation in Myanmar.

“But this cannot happen as long as it is enforcing laws that undermine the very lifeblood of democracy, and the right to vote is denied based on race, ethnicity, or religion as it is with the Rohingya,” he said.

Myanmar is also facing a case of genocide against the mostly Muslim Rohingya community at the International Court of Justice.

More than 740,000 Rohingya fled Myanmar into neighboring Bangladesh in 2016 and 2017 as the military waged a campaign of violence in Rakhine state.

Rohingya survivors have recounted harrowing atrocities including gang rapes, mass killings, torture and widespread destruction of property at the hands of the army.

Also, strict restrictions have been imposed to stem the spread of the coronavirus infection.

In view of the pandemic, millions of elderly voters have already cast votes by the Nov. 5 deadline.

A joint statement by at least 10 Myanmar-based civil society organizations asked Myanmar to ensure the right to vote, regardless of race, religion or ethnicity.

The statement came after the exclusion of Rohingya voters and candidates and an announcement from the Union Election Commission that it will cancel voting in several ethnic areas, including in Kachin, Chin and Rakhine states, disenfranchising up to 1 million voters in Rakhine State alone.

Authorities also canceled voting in areas of the Bago Region and Karen and Mon states, according to the Fortify Rights group.