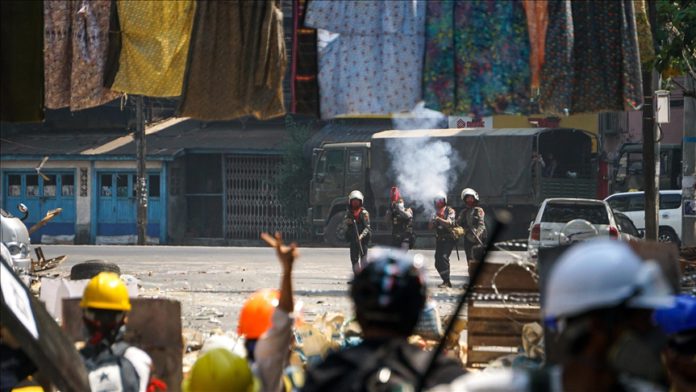 At least four people have been killed and several others injured on Monday after security forces fired live bullets at protesters in two Myanmar towns, according to local media and eyewitnesses.

Myanmar junta launched raids on Sunday night, arrested dissidents, and deployed troops in universities and hospitals across the country as a proactive measure to deter the nationwide protests which opponent leaders and labor unions called to keep the momentum of the anti-coup movement up.

Thousands of protesters, however, continued taking to streets throughout Myanmar on Monday, taking the risk of crackdown by the security forces who often used live rounds of ammunition to disperse crowds and have caused more than 60 deaths so far.

In Myitkyina, the capital city of northern Kachin state bordering China, tens of thousands of protesters refused to be dispersed, defying the tear gas, rubber bullets and stun grenades fired by the police.

According to footages shared on social media, the crowd instead moved forward to the police, throwing stones and projectiles while shouting the anti-junta slogans. A moment later, soldiers stepped up and opened fire on the protesters.

The Myitkyina News Journal reported that two men were shot in head and died at the scene while seven protesters were injured by the live bullets.

The report said the victims were Zin Min Htet, 23, and Ko Ko Lay, 62, both the residents of Myitkyina town.

Local media reports also confirmed the death of a 19-year-old woman who was shot in left arm during the crackdown in Myitkyina.

Another protester was also reportedly died on Monday after being hit by a bullet during a police crackdown on protesters in Pyapon, a small town about 120 kilometers (74.5 miles) west of Yangon, the largest city of Myanmar.

A leading local news outlet Myanmar Now reported citing the witnesses that it remains unclear whether Thiha Oo, 30-year-old man, was killed by a rubber or live bullet.

As the anti-coup protests enter the second month, security forces are seem escalating the violent crackdown on crowds in several regions in Myanmar, including two largest cities Yangon and Mandalay, both seeing the most fatalities related to the demonstrations.

Women in Yangon, Mandalay and other cities rallied with flags from woman’s sarongs, a traditional cloth, to mark the International Women’s Day as well as to slow down the police and soldiers.

By laying the woman’s sarongs, underwear and sanitary pads on line across the street, protesters disturbed the charge of police and soldiers as they chose other routes to avoid passing under the sarongs. Walking or staying beneath the woman’s sarongs is considered bad luck for men.