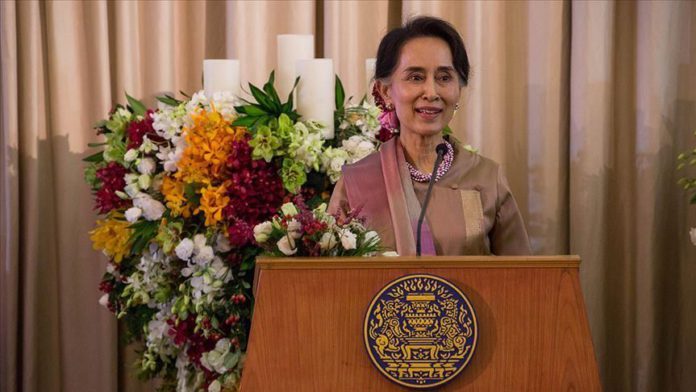 Aung Shin, a spokesman for the ruling National league for Democracy party, claimed his party has so far won 246 seats at national legislature based on the reports from their candidates.

Myanmar’s bicameral parliament, Pyidaungsu Hluttaw, is divided into the Amyotha Hluttaw, the 224-member House of Nationalities or upper house, and the Pyithu Hluttaw, the lower House of Representatives with 440 seats.

“We tally the wins reported by the respective candidates across the country. We are sure so far that we won 100% in three regions, and wins at least 264 seats in Pyithu Hluttaw and Amyotha Hluttaw,” Aung Shin told Anadolu Agency over phone on Monday.

“We are very confident to win at least 322 seats in Pyihtuangsu Hluttaw so that we could elect our president and be in charge of the union government for next five years,” he said.

He said central Mandalay region is one of three regions where NLD wins all seats (100%).

“So Daw Win Mya Mya also wins the seat,” he said, referring to one of its two Muslim candidates, Win Mya Mya, who contested for a seat in Pyithu Hluttaw.

He said another Muslim candidate, Sithu Muang who is a youth leader and a former political prisoner, also won a seat in regional parliament in Yangon region.

The Union Election Commission is set to make the first statement on the election results later today, but said it would take days to announce the whole results.

International Federation of Journalists (IFJ) on Monday expressed concern over the Internet shutdown and spread of misinformation during the general elections in the country.

“In the lead up to the election the Myanmar government’s ongoing shutdown of internet services in Western Myanmar was extended, restricting access to telecommunication services for over a million citizens in conflict zones,” the IFJ said, terming it government’s “blatant manipulation and interference with the democratic process, restricting access to communication, press freedom and personal expression.”

“Government censorship, restricted access to impartial content and the dissemination of misinformation gravely undermine the political process in Myanmar and negatively impact vulnerable citizens in Rakhine and Chin states. The IFJ calls for the immediate reinstatement of access to internet and telecommunications and controls placed on the spread of misinformation,” it added.

“Elections held yesterday in Myanmar unfree and unfair,” the rights group said in a statement.

“A core principle of elections under international law is universal and equal suffrage and that is not what took place yesterday,” said Ismail Wolff, regional director of Fortify Rights based in Thailand.

“The international community must unequivocally condemn the disenfranchisement of Rohingya and other ethnic nationalities or risk paving the path for future violations,” he added.