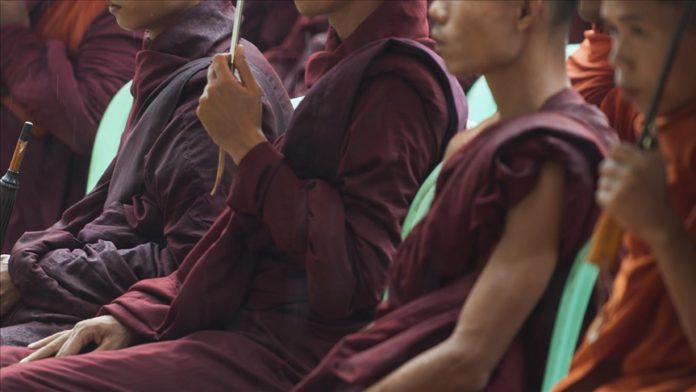 A human rights organization urged the military in Myanmar to “immediately release” three Buddhist monks Friday who were detained during a military coup earlier this week.

The group said the three monks were detained Monday in Mandalay and Yangon “as part of the sweeping arrests that led to the military’s coup d’etat.”

Sobitha “reportedly” has been sentenced to two years in prison.

“Myawaddy Sayadaw has been disrobed and is scheduled to appear in court again on 9 February,” BHRN said without providing details about Nya War.

“The three monks are peaceful figures known for standing against toxic religious nationalism.

“Their arrests were part of the military’s early efforts to imprison activists, artists, and religious figures who would have stood against the coup government,” the group said.

“While the world is rightly outraged by the detainment of the NLD’s political leadership, they must not overlook the activists and religious leaders who have also been imprisoned,” said BHRN’s Executive Director Kyaw Win.

“Burma’s military has long fostered a relationship with violent nationalist monks and silenced those seeking peace and harmony in the society. Monks have played a vital role in promoting fairness,” he said.

“The Sangha [monks] has played a vital role in Burma’s progression towards a more democratic and peaceful society, and for this reason, the military has repeatedly infiltrated, attacked, tortured, and imprisoned them,” he said. “We must not forget them in our calls for freedom and justice.”

BHRN also said it “received reports of other religious leaders and activists being questioned and harassed since the military seized full control of the country.”

“Many are going into hiding fearing they too will be imprisoned. With the recent failure of the UN Security Council to condemn the coup in Burma, individual nations must take steps independently to counteract it,” it said, as it implored the international society to put maximum pressure on the army.

Suu Kyi served the country from 2016 to 2021 following a long struggle for democracy in the nation that earned her the Nobel Peace Prize in 1991. But her silence regarding the massacre of Rohingya Muslims and defense of the military’s genocide at the international court drew harsh criticism across the globe.

The military claimed the coup was staged due to “election fraud,” which it said resulted in the dominance of the ruling party in parliament.

16th round of Astana talks on Syria to be held July...