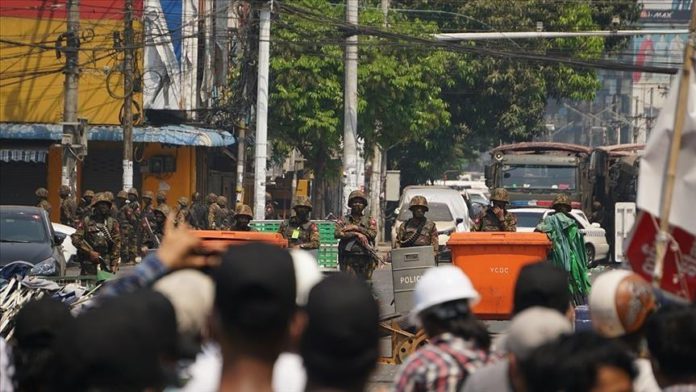 Amid palpable fear in Myanmar following a deadly crackdown on anti-coup protests, people continued to gather in several cities on Thursday, taking precautions to protect themselves from an increasingly violent military junta.

Wednesday marked the bloodiest day in the country since the military’s Feb. 1 power grab, with at least 38 people killed when security forces opened fire on demonstrators in various areas.

Citizens, wary of more aggression by authorities yet undeterred, were seen taking a different approach on Thursday, gathering in neighborhoods instead of main protest sites.

In Yangon, major roads and streets were blocked with makeshift barricades and sandbags to keep security forces at bay.

“It would be a killing field if we are together in large crowds. Instead, we are gathering in our own areas; this means the junta will have to deploy troops across the city,” said a protester in Ahlone township.

Demonstrations are also taking place in other parts of the country, including Mandalay and Monywa, where several people died in Wednesday’s violence.

More than 100,000 people were part of demonstrations on Thursday, according to local news outlet Monywa Gazette.

In Yangon’s North Okalapa area, at least 22 people were killed by security forces on Wednesday.

Khin Zaw Win, director of Yangon-based think tank Tamadipa Institute, said troops “acted like they were in a battlefield” while confronting protesters in Yangon.

“Police personnel and soldiers did not follow any standard operating procedures. They shot people indiscriminately. At some point, they even broke into and looted shops and houses,” he told Anadolu Agency over the phone.

Hundreds of people were also reportedly arrested in Yangon, including four volunteer rescue workers who were helping injured protesters in North Okalapa.

Who are Palestinian escapees from Israel’s Gilboa prison?