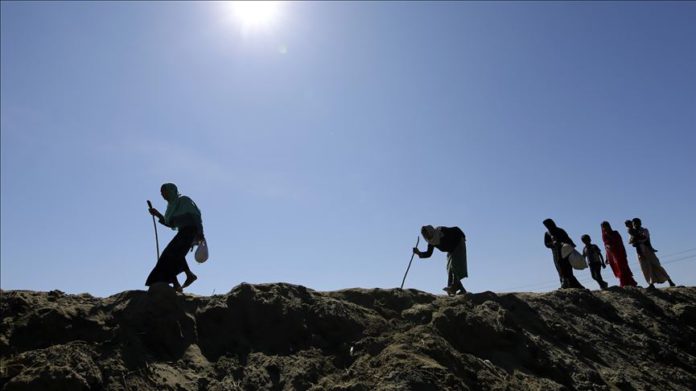 Human rights organization Amnesty International announced Monday that it has gathered fresh evidence of indiscriminate attacks on civilians in western Myanmar amid an escalation in an ongoing armed conflict between the  country’s military and the Arakan Army.

The evidence suggests that the Myanmar military burned villages and wounded and killed civilians in Rakhine in early September.

It is based on firsthand testimony, photographs and video obtained from inside Rakhine and analysis of satellite imagery as well as media reports and civil society sources, Amnesty said in a report.

The rights organization said it is also concerned over recent reports of an increased presence of Myanmar troops along the border between Myanmar and Bangladesh.

Images of antipersonnel landmines recently discovered in a civilian area were analyzed by Amnesty’s weapons expert and identified as the MM2 type landmine often used by Myanmar’s military.

Several incidents involving civilians injured or killed by landmines have been credibly reported in Rakhine and Chin states in recent months by local civil society and media outlets.

By one local civil society group’s estimate, the number of civilians killed in the conflict since December 2018 in Rakhine and Chin stands at 289 with 641 injured.

The true figure cannot be independently verified as a mobile internet shutdown and broader government crackdowns on media reporting have impeded documentation efforts in conflict-affected areas.

On Sept. 14, UN High Commissioner for Human Rights Michelle Bachelet told the Human Rights Council that in some recent cases in Rakhine, civilians “appear to have been targeted or attacked indiscriminately, which may constitute further war crimes or even crimes against humanity.”

Satellite image analysis conducted by Amnesty has found that over 120 structures in the ethnic Rakhine-populated villages of Taung Pauk and Hpa Yar Paung in Kyauktaw township appeared burned to the ground in imagery captured on Sept. 10, 2020.

New figures from the United Nations Office for the Coordination of Humanitarian Affairs (UNOCHA) indicate that 89,564 people were displaced to 180 sites in Rakhine between January 2019 and Sept. 7, 2020.

This adds to the existing mass displacement crisis in Rakhine, where over 130,000 Rohingya have been interned in camps since 2012.

The internet blackout has impeded the delivery of critical humanitarian aid and access to crucial information about the conflict and the COVID-19 pandemic, with the virus increasingly spreading across Myanmar since mid-August, including and particularly in Rakhine.

On Sept. 11, 2020, the Myanmar military admitted that three of its soldiers had raped an ethnic Rakhine woman during operations in Rathedaung township on June 30, despite their outright denials when the allegations were first raised in July.

“There are no signs of the conflict between the Arakan Army and the Myanmar military abating – and civilians continue to bear the brunt,” said Ming Yu Hah, Amnesty International’s Deputy Regional Director for Campaigns.

“The Myanmar military’s utter disregard for civilian suffering grows more shocking and brazen by the day. The UN Security Council [UNSC] must urgently refer the situation in Myanmar to the International Criminal Court [ICC].

“The international community must raise the alarm about the situation in Rakhine state now, or face questions later about why they failed to act – again,” she said.

Myanmar’s government and military have been committing crimes against humanity and war crimes against Rakhine Buddhists since early 2019, Ro Nay San Lwin, a rights activist and co-founder of the Free Rohingya Coalition, told Anadolu Agency.

“Myanmar continues to commit crimes against ethnic minorities as the international community is failing to take serious action. Instead of talking about impossible action [such as referring Myanmar to the ICC through the UNSC, which China and Russia will veto], practical action is to boycott Myanmar diplomatically, economically and socially,” Lwin added.