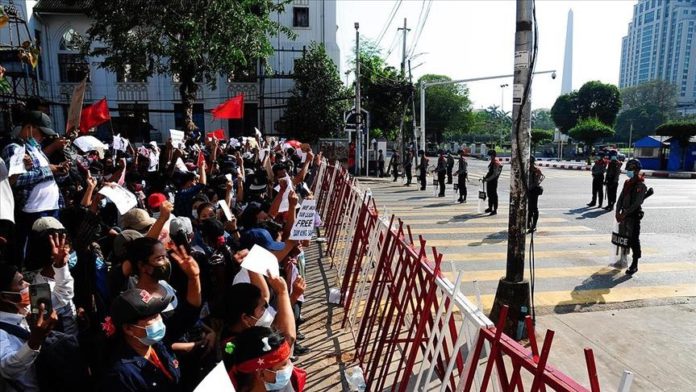 The military government did not say anything about the anti-coup protests until Monday’s ominous warning by state-owned media outlets that “disturbances” would be met with legal action.

Local authorities also announced by loudspeakers in the commercial city of Yangon and the second-largest city of Mandalay that the curfew would run from 8:00 p.m. local time to 4:00 a.m. local time.

The announcement also prohibited the gathering of five or more people in public places and also banned anti-coup protests.

The restrictions were imposed following the start of a national general strike on Monday, with staff from several government departments joining the movement against military rule.

Earlier, thousands of demonstrators chanted slogans and held anti-coup signs during rallies in the major cities of Yangon, Mandalay, and Nay Pyi Taw and other parts of the country, including the major jade mining region in the northern Kachin state and the southernmost border town of Myeik.

Soon after the announcement, a pro-military convoy of at least 30 vehicles was seen in the streets of Yangon waving national flags and playing martial songs.

Seeing the pro-military convoy, the anti-coup demonstrators dispersed peacefully from the city center where they had gathered to support the restoration of democracy in the country.

BBC says 3 of its journalists detained by Sudanese security forces