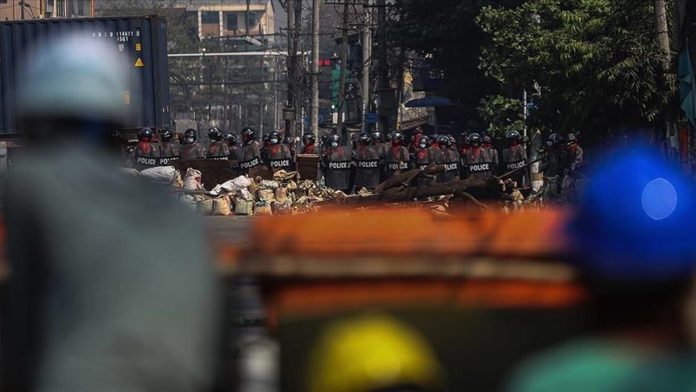 At least 200 persons were arrested when military forces and police on Wednesday raided townships and railway residential compound in Myanmar’s largest city of Yangon.

Defiance among Myanmar’s public sector employees against the military rule is spreading across the country, termed as “civil disobedience movement.”

Separately, health workers have also refused to take a second shot of COVID-19 vaccine as a mark of protest against the coup, according to Frontier Myanmar news website.

In January, more than 103,000 government health workers received the first Oxford-AstraZeneca vaccine jab. But the staff at the Lashio General Hospital (LGH) in northern Shan province refused to take the second shot scheduled for Feb. 25, it reported.

The report noted that the refusal to take the COVID-19 vaccine is part of their commitment to the so-called civil disobedience movement.

The military junta has arrested at least 1,932 people since the coup, the report cited a statement from the Assistance Association for Political Prisoners.

Around 350 youth were detained last week for anti-coup demonstrations and are being held in Yangon’s infamous Insein Prison.

“It’s been a week since my daughter was arrested, and I don’t know anything for certain. Even lawyers don’t know what to do,” said the mother of a 21-year-old University of Yangon student who is among those detained.

Since the Feb. 1 military coup, at least 68 people have been killed during anti-junta protests. While the police and security forces have arrested political leaders, most of them from the deposed ruling party, the National League for Democracy, and other civil society activists.

Several journalists have also been charged while media houses have been raided by the police and soldiers.

Donors announce $1.7B to scale up aid in Central Sahel