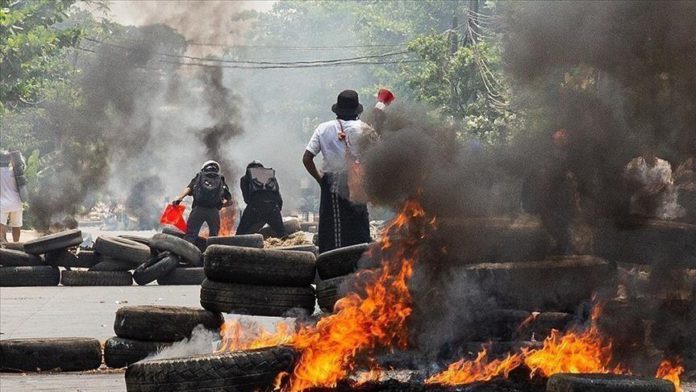 Experts are urging that the agenda for the Association of Southeast Asian Nations (ASEAN) Leaders Meeting in the Indonesian capital Jakarta on Saturday should be able to produce concrete actions to end violence in Myanmar.

Rizal Sukma, an international relations expert from the Center for Strategic and International Studies (CSIS), said the most realistic solution that can be expected from ASEAN at this point would be to encourage a humanitarian pause and provide assistance to Myanmar’s people.

“Offering humanitarian pause is the only way that is still realistic at this time,” Sukma told Anadolu Agency on Thursday.

He said that if the junta that took control of the country on Feb. 1 refuses and continues to kill its own people, the armed conflict between the military and the National Unity Government (NUG) could expand.

The NUG was formed by opponents of Myanmar’s junta, including ousted members of parliament and leaders of anti-coup protests and ethnic minorities.

“Now, it has become a civil war, but it has not spread throughout Myanmar,” said Sukma, who is a former Indonesian ambassador to the UK.

He noted that if the meeting failed to provide concrete steps in reducing violence, there were three options.

First, he said, ASEAN needs to respond strongly by banning the military junta from participating in ASEAN meetings.

“But, this is unlikely to happen because member countries certainly do not share the same view,” said Sukma.

Second, ASEAN countries concerned about the situation in Myanmar need to create a coalition and cooperate with dialogue partner countries to find diplomatic solutions.

Third, each member country must respond unilaterally according to their own considerations.

“I cannot be optimistic, but I hope ASEAN can urge the junta to do a humanitarian pause and stress the importance of it,” he added.

The Assistance Association for Political Prisoners (AAPP) local monitoring group confirmed on Thursday that at least 739 people died during the brutal crackdowns by Myanmar forces since February. Meanwhile, a total of 3,331 people have been detained.

Meeting must be free from external intervention

Speaking to Anadolu Agency, Ramadhan Muhaimin, an international relations expert, raised the factors of China’s and Russia’s interests that could affect the ASEAN Leaders Meeting.

Muhaimin said this was discernable in recent minister-level meetings between four ASEAN member countries and China to discuss the Myanmar crisis from the end of March to early April.

He said Russia and China have been backing the junta and that the situation in Myanmar would have a global impact if violence continues.

“China and Russia, on one hand, condemn violence in Myanmar, but on the other hand, they held back international sanctions for the junta,” said Muhaimin.

He noted that ASEAN has a regional forum that can be held to discuss political and security issues in the region, including the crisis in Myanmar.

However, despite a regular meeting schedule, the forum also invites other major powers outside the bloc, including the US, China, Japan, Russia and the EU to engage in constructive dialogue.

“This is what China tried to avoid, so they urged an ASEAN Leaders Meeting instead of the ASEAN Regional Forum,” he said.

He stressed that the bloc should not be dictated by China and other external powers as it would be dangerous for its credibility and independence.

“ASEAN may not intervene in matters that are considered domestic by its members on behalf of the ASEAN Way or the non-intervention principle, but on the other hand, these regional organizations are vulnerable to intervention by other major powers outside the legitimate forums,” said Muhaimin.

“So, it would be rational for civil society groups to voice their call on Jakarta to reject the attendance of [junta chief] Gen. Min Aung Hlaing [in the meeting],” he said. “And this isn’t good for Indonesia’s credibility to welcome the general, while human rights violence is still ongoing in his country by his soldiers against his own people.”

As the host of the meeting, which should have been Brunei, Jakarta is risking its credibility, but it is also an opportunity for the country to promote its national interests in the region.

From March until earlier this month, Chinese Foreign Minister Wang Yi met with his counterparts from Indonesia, Malaysia, Singapore, and the Philippines in Fujian, China.

During the meetings, China voiced its support for the bloc and for Indonesian President Joko Widodo’s initiative to resolve Myanmar’s conflict with the ASEAN Summit.

“Chinese Foreign Minister Wang Yi has the same concerns over the development of the situation and does not want to see Myanmar people suffer,” Indonesian Foreign Minister Retno Marsudi told a virtual press conference during her visit to China earlier this month.

The Indonesian civil society network urged ASEAN to direct the responsibility mechanism for human rights violations that occurred in Myanmar so the military can be tried in an international criminal court.

“We urged the criminal accountability of the perpetrators, including General Min Aung Hlaing as the leader of the coup,” Usman Hamid, executive director of Amnesty International Indonesia and a member of the network, said in a virtual meeting.

Hamid also urged ASEAN and other international communities to take action to stop the massacres in Myanmar.

He called on ASEAN not to be trapped by the “non-intervention principle” in taking a stand.

“The international world must intervene, every country has an obligation to stop the violence, especially if there is bloodshed,” he continued.

Hamid also urged Indonesia to make diplomatic efforts and encourage the ASEAN community to take a unanimous position in calling on military forces to end human rights violations in Myanmar, as well as imposing sanctions against the country.

“If necessary, ASEAN can send a special envoy to Myanmar to ensure that the peace dialogue will be held to stop all forms of human rights violations.”