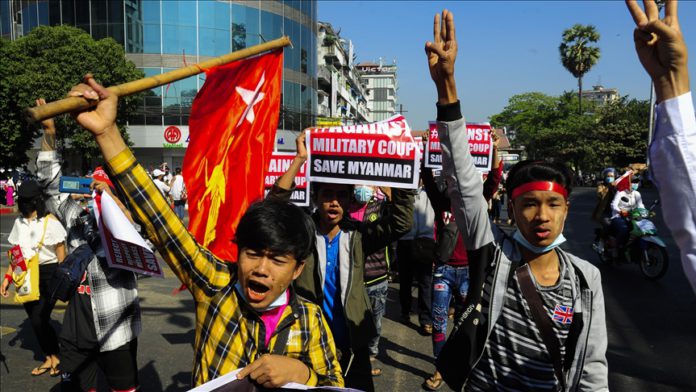 However, the actions have failed to deter protesters as large rallies and demonstrations continued in several cities of Myanmar on Thursday.

In Yangon, hundreds gathered near the Central Bank building entrance, calling on the remaining staff to join the civil disobedience movement.

Among those arrested in the Wednesday night swoop were Tun Tun Hein, deputy speaker of the lower house of Myanmar’s parliament, and chief ministers of five regions, including the restive western Rakhine state, according to the National League for Democracy (NLD) official.

“They were under house arrest since the coup, but all of them were taken away by police and soldiers late last night,” he told Anadolu Agency, requesting anonymity due to fear of reprisal.

“They were supporting the anti-coup movement and pushing government employees to stop going to work and join the non-violent resistance.”

He explained that the chief ministers had promised to reward people with “better positions” if they joined the ongoing demonstrations.

The party’s headquarters in Yangon was also raided on Tuesday night, with military and police personnel taking away documents, destroying CCTV cameras, and erasing footage.