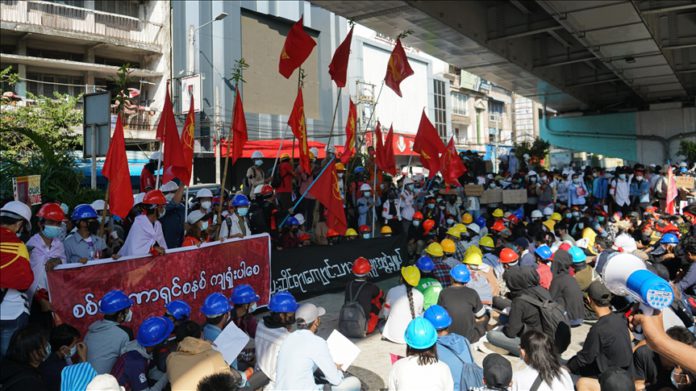 Anti-coup protests in Myanmar continued to grip the streets for a fifth day on Wednesday amid a police crackdown that has resulted in two deaths.

Several were injured, with two in critical condition, after police in Myanmar’s administrative capital Nay Pyi Taw fired water cannon and rubber bullets in confronting the demonstrators Tuesday. It was the first such incident since the anti-coup protests begun.

Large-scale protests continued to erupt in Yangon and other cities across the Southeast Asian country on Wednesday. At the same time, government staff marched in support of swelling civil disobedience initiated by health workers.

In downtown Yangon, Protesters were seen prepared for a potential police crackdown, some carrying large metal pans and umbrellas, while others were spotted as bringing inflatable pool.

“We’re not trained to resist water cannon and tear gas, but we can’t simply stay at home in fear,” said Myo Ma Ma, a 21-year-old student who joined a rally in Yangon’s Hlaing township.

The public transportation system in Yangon appeared to grind to a halt partly because the staff at government-run gas stations went on strike.

In the second-largest city of Mandalay, hundreds of Buddhist monks joined the rallies marching through the city.

US: militants partially succeeded in Kenya base attack