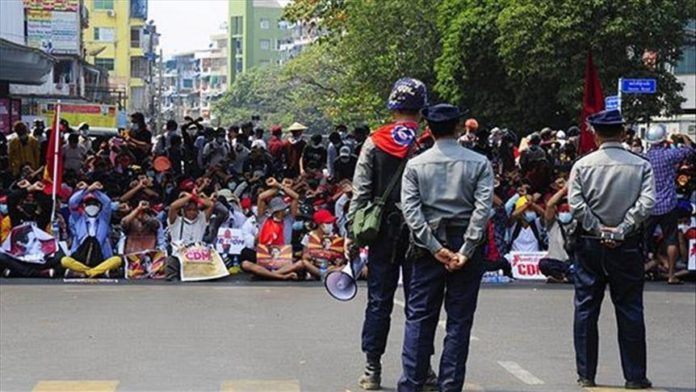 A Myanmar court has filed another charge against ousted ruler Aung San Suu Kyi, her lawyer said on Monday.

Suu Kyi, who was detained by the military on Feb.1, is already facing two criminal charges — for allegedly importing and possessing walkie-talkies illegally and violating a coronavirus-related restriction.

Lawyer Thae Maung Maung said that the new charge was brought against her for alleged incitement that carries a maximum of two-year imprisonment.

“The court in Nay Pyi Taw’s Zabhuthiri township will hold a preliminary hearing via videoconferencing,” he was quoted by the local media as saying.

The National Administrative Council, chaired by the coup leader and military chief Min Aung Hlaing, has been escalating the crackdown on the anti-coup movement.

Anti-coup mass protests, however, continued in cities and towns in Myanmar on Monday.

Police fired stun grenades, tear gas, and rubber bullets to disperse crowds demonstrating behind the makeshift barricades in at least three protest sites in the largest city of Yangon.

Footage shared on social media showed police and soldiers entering residential areas in the northern city of Mandalay searching for protesters while firing slingshots at those in the balconies who were banging pots and pans in a show of protest.

Myo Min Zaw, a protester in Snachaung township, one of three main protest sites of Yangon, said the situation was less tense than Sunday.

“Police and soldiers were cracking down the protests since before it started on Sunday. Their intention was to stem out a major anti-coup rally,” he told Anadolu Agency.

Sunday was the deadliest day since the military coup when more than a dozen people died during the crackdown in which security forces even used lethal weapons.

The UN said at least 18 people were killed and 30 wounded on Sunday, bringing the total number of protesters killed since the coup to at least 21.

According to the Assistance Association for Political Prisoner, an independent body formed by Myanmar’s former prisoners living in exile, at least 1,132 people have been arrested or detained since the coup.

This includes 26 journalists who were detained by the security forces while covering the protests.