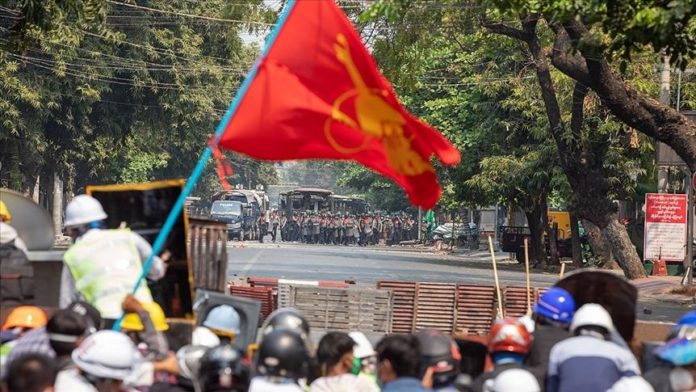 A seven-year-old girl was shot dead by junta forces in Myanmar’s second-largest city of Mandalay on Tuesday, becoming the youngest victim in the crackdown against the Feb. 1 military coup, her family said.

Khin Myo Chit was sitting on her father’s lap when soldiers entered their home and tried to shoot him, her sister told the Myanmar Now news website.

Protests have continued in Myanmar since Tatmadaw – the official name of the Burmese military – seized control.

According to the rights group Save the Children, at least 20 children have been killed since the takeover.

“They asked if everyone in the house was there. My father responded that that was everyone. Khin Myo Chit was sitting in our father’s lap. One of them said my father was lying and shot at him,” she said.

But the bullet hit her sister instead. She was rushed to a hospital but succumbed to the wounds.

She said that later her 19-year-old brother was also detained.

“We are horrified that children continue to be among the targets of these fatal attacks on peaceful protestors,” Save the Children said in a statement. “The fact that so many children are being killed on an almost daily basis now shows a complete disregard for human life by security forces.”

The Thailand-based Assistance Association for Political Prisoners said at least 275 people have been killed in protests.

In its latest update, the group said as many as 2,812 people have been arrested, charged or sentenced in cases related to the anti-coup protests.

On Wednesday, demonstrators in multiple cities began a “silent strike” as part of the disobedience movement.

Major businesses and other establishments remained closed, leaving many cities and towns including Falam, Kalay, Kyaukme, and Yangon, at a standstill.

*Pizaro Gozali Idrus contributed to this report from Jakarta, Indonesia