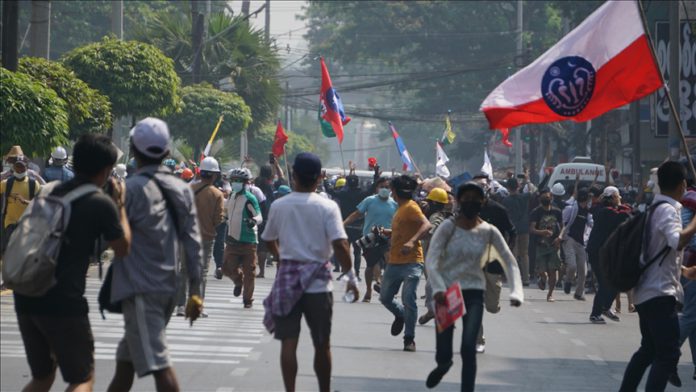 At least 10 people were reportedly killed and many others injured in a police crackdown on anti-coup demonstrators in several Myanmar cities on Sunday.

According to eyewitnesses and local media, anti-coup demonstrators were met with tear gas, rubber bullets, and stun grenades as police and soldiers intensified a crackdown on a campaign against the recent military coup in the Southeast Asian country.

News website Khit Thi Media reported that four protesters were killed in the commercial city of Yangon and three in Bago, a town about 78 kilometers (48 miles) east of Yangon, and three in Dawei, the capital of the southern coastal region of Tanintharyi.

A university student and a school teacher were among those killed in Yangon, witnesses and reports said.

It added that a female school teacher died of a heart attack after being hit by a rubber bullet.

“It was shocking to see how brutal the police are. They fired tear gas, then rushed to the protesting teachers, and started to beat and kick them,” said Myo Thein, a witness who runs a roadside food stall near the protest site.

“Police showed no mercy to them,” he said, adding that about 40 school teachers were detained by the police during the crackdown.

The All Burma Federation of Student Unions said in a statement that one of their members was killed during a protest in the Hledan Street Junction, a major protest site in Yangon.

It stated that Nyi Nyi Aung Htet Naing, a 23-year-old student at the University of West Yangon, was killed when the security forces shot him in the torso.

Anadolu Agency was not immediately able to confirm whether police had used live rounds.

A resident of Dawei told Anadolu Agency that police and soldiers had violently dispersed the crowd.

“They even entered houses where protesters were hiding, and opened fire,” she said, adding that a female protester was injured after being shot in her house before being dragged out by police.

“She was shot twice before the police pulled her out of my house,” said the woman in her 40s, on condition of anonymity.

The Human Rights Watch (HRW), however, has accused security forces of using lethal weapons against the peaceful protesters.

The Myanmar Security Forces’ violent treatment of demonstrators in response to largely peaceful anti-coup protests is unacceptable and must be stopped immediately, said a statement by HRW Asia Deputy Director Phil Robertson.

Live ammunition should not be used to control or disperse protests, and lethal force can only be used to protect life or prevent serious injury, he added.

Paramedics treating wounded demonstrators at protest sites have also been arrested by security forces to intimidate those supporting pro-democracy protesters, according to the statement.