TurkishPress
Home News ‘My heart weeps’: Academic dreams end in years of anguish due to... 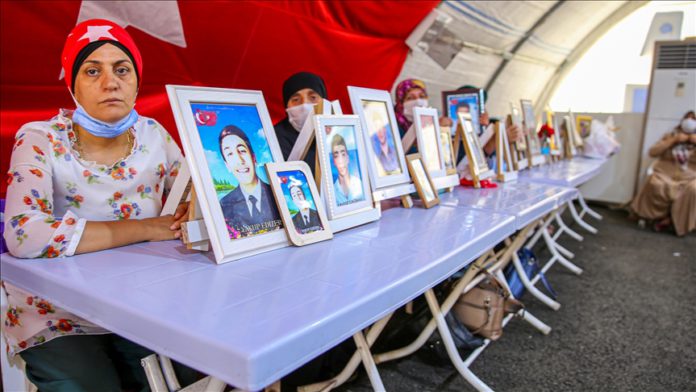 With only months left until his graduation from the communications faculty at Ege University in Turkey’s Izmir province, Immihan Nilifirka was over the moon, having dreams of her son Mehmet becoming a respected journalist.

But her vision for her child’s future was shattered when she learned that Mehmet, then 22, was “brainwashed” and recruited by the PKK terrorist group in 2015.

Today, Nilifirka is part of the sit-in protest in Turkey’s southeastern Diyarbakir province, one of around 30 distraught parents and family members hoping to be reunited with their missing sons, daughters, brothers, or sisters.

Since September 2019, some 234 families have participated in the protest outside the Diyarbakir office of the Peoples’ Democratic Party (HDP), who they, as well as the Turkish government, accuse of having links to the PKK.

Designated as a terrorist organization by Turkey, the US, and the EU, the PKK has been responsible for the deaths of at least 40,000 people, including women, children, and infants, in its more than 35-year terror campaign against Turkey.

“Mehmet was studying [journalism] at Ege University in Izmir. It was his last year; he was just two months away from taking up his profession,” she said, trying but failing to hold back her tears.

“My heart weeps whenever I see a young person like you with a backpack and a microphone in their hand. I see that they are a journalist, like my Mehmet.”

The immeasurable grief of losing a child in such a manner has clearly taken a toll on Nilifirka, who seems to have aged well beyond her 48 years.

“I came here with Mehmet’s sister two days ago. She saw a young man holding a microphone and she broke down, crying on the stairs, saying that he was just like Mehmet. She kept saying ‘Mehmet was supposed to do his job’ as she wept,” the mother said.

She shared how Mehmet’s disappearance has impacted his family, with his siblings developing an aversion to academics and the overwhelming stress, causing rifts and arguments between the parents.

“Our family was torn to pieces. They [PKK] not only took our child from us but also destroyed a family,” she said.

Yusuf Erdinc, another protester, narrated the ordeal of losing his son, Mikail, who was 19 when he was forcibly recruited by the PKK terror group while studying law at the Marmara University in Istanbul.

He said Mikail put in a lot of effort to secure his place at the university, earning him the respect of his family, friends, and relatives.

“He used to study day and night. Once I found him asleep on his desk at midnight,” said Erdinc, the anguish of his son’s disappearance visible on his face.

Erdinc, 58, said he was proud to see his son push himself that hard but also concerned for his health.

“We were on top of the world when Mikail earned a spot at one of the country’s best universities. He was going to be the first one in the family to have a degree and was a role model for his siblings,” the father said, his sorrowful eyes betraying his composed demeanor.

“I am a farmer, just like all of my brothers. We never had a chance to get an education. I was so happy that my son would finally break this cycle.”

Erdinc, a father of seven, did his utmost to make sure that Mikail had everything he needed to focus on his studies in Istanbul.

Other family members also stepped in and contributed financially to support Mikail, he said.

For Erdinc, “everything was ruined” when Mikail was tricked into joining the PKK terror group in 2015, and he has not heard from his son to this day.

“I am not leaving this protest without my son. I will stay here even if it takes my life. I am not going to sit by and watch our enemies use my precious son as a pawn,” he said.

Erdinc and Nilifirka, like the others at the protest, have a glimmer of hope that they are clinging to with all their might — the 32 children who fled from the PKK and turned themselves over to security forces in Turkey, where a repentance law makes sentence reductions possible for offenders linked to terrorist groups if they surrender.

‘My heart weeps’: Academic dreams end in years of anguish due to PKK terror group