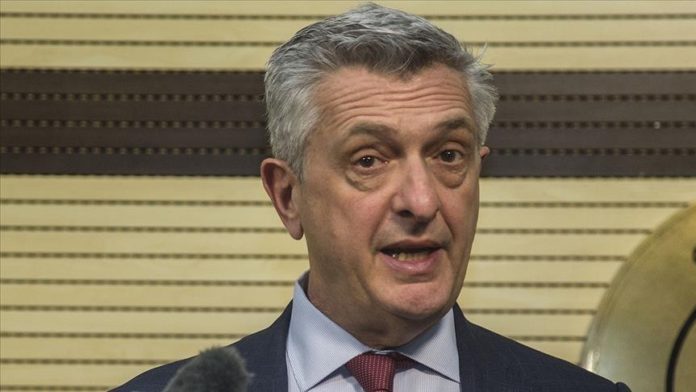 The head of the UN Refugee Agency, UNHCR, on Monday voiced “deep concern” over rising incidents of violence and serious human rights violations against refugees and migrants at European borders.

“We are alarmed by recurrent and consistent reports coming from Greece’s land and sea borders with Turkey, where UNHCR has recorded almost 540 reported incidents of informal returns by Greece since the beginning of 2020,” UN High Commissioner for Refugees Filippo Grandi said in a statement.

“What is happening at European borders is legally and morally unacceptable and must stop.”

He said disturbing incidents are also reported in Central and Southeastern Europe at the borders with EU member states.

“Violence, ill-treatment, and pushbacks continue to be regularly reported at multiple entry points at land and sea borders, within and beyond the European Union, despite repeated calls by UN agencies, including UNHCR, intergovernmental organizations, and NGOs to end such practices.”

Grandi said that although many incidents go unreported, UNHCR has interviewed thousands of people across Europe who were pushed back and reported a disturbing pattern of threats, intimidation, violence, and humiliation.

“At sea, people report being left adrift in life rafts or sometimes even forced directly into the water, showing a callous lack of regard for human life,” said the refugee agency chief.

He said that at least three people are reported to have died in such incidents since September 2021 in the Aegean Sea, including one in January.

“Equally horrific practices are frequently reported at land borders, with consistent testimonies of people being stripped and brutally pushed back in harsh weather conditions,” said Grandi.

With few exceptions, European states have failed to investigate such reports, despite mounting, credible evidence, he added.

“Instead, walls and fences are being erected at various frontiers,” said Grandi.

“In addition to denial of entry at borders, we have also received reports that some refugees may have been returned to their country of origin, despite the risks they faced there, which may be at variance with the international legal principle of non-refoulment.”

He explained that the right to seek and enjoy asylum does not depend on the mode of arrival to a country.

People who wish to apply for asylum should be allowed to do so, and they should be made aware of their rights and provided legal assistance, he added.

“People fleeing war and persecution have few available options. Walls and fences are unlikely to serve as a meaningful deterrent,” said Grandi.

They will contribute to greater suffering of individuals in need of international protection, particularly women and children, and prompt them to consider different, often more dangerous, routes and likely result in further deaths, he said.

“We fear these deplorable practices now risk becoming normalized and policy-based. They reinforce a harmful and unnecessary ‘fortress Europe’ narrative.”

He said that most of the world’s refugees are hosted by low- and middle-income countries with far fewer resources, often bordering countries of origin in crisis.

Erdogan, Putin meet ahead of launch of TurkStream