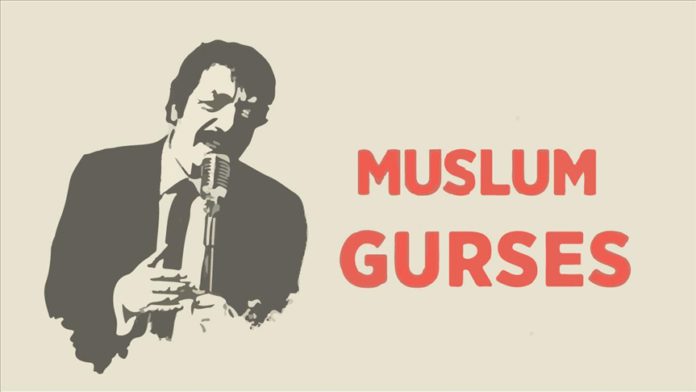 This Wednesday marked the eighth anniversary of the death of Turkish singer Muslum Gurses, a national legend for his mournful, melancholy lyrics and contributions to arabesque music.

Gurses was best known for his mournful tunes blending Turkish folk instruments with Arabic or “arabesque” (arabesk) melodies, and his albums sold millions. He died of heart failure in 2013 when he was just 59 years old.

The Turkish public had a love-and-hate relationship with the popular singer. While the 1980s saw his songs banned in Turkey, some of his passionate fans are known for having cut themselves with razor blades at his concerts.

Gurses’ real name was Muslum Akbas. He was born on May 7, 1953, in a village in Sanliurfa, a southeastern province long known as underdeveloped.

When he was 3 years old, his family had to move to the southern province of Adana due to economic difficulties.

He could not continue his education after primary school and worked as a shoe repairman as well as a tailor for a while.

In a television interview, the legendary singer recalled his time in Adana:

“We were living in a small house. At that time, Adana was, of course, very hot. Everyone was lying on the roofs. We also sleep on the roof, just because it was hot. We were singing [songs] in my own way.

“Our neighbors would say, ‘Your voice is good. Sing one more, another one'” he recalled.

He mentioned a friend of him, Mustafa, who attended the Public Education Center and playing baglama, an indigenous Turkish lute-like instrument.

“I asked him if I could attend [to the education center],” Gurses recalled at that time, adding he learned a lot there.

Despite his father’s unwillingness, her mother supported the singer to participated in a singing contest held in a tea garden in southern Adana province when he was 14 years old in 1967, in which he won.

He took the stage as a headliner in a casino in Adana, attracted great attention.

While Gurses gave concerts in various venues in Adana, he sang live folk songs on Turkey’s state radio TRT – Cukurova every Saturday since 1967.
He released his first record in 1968, started to climb the career ladder rapidly.

But perhaps the most tragic incident in his life came when he was still a young man, in 1969, when his father stabbed his mother to death.

Gurses, who never wanted to talk about the painful incident he experienced, made two records in Istanbul, where he came after his mother’s death.

Another tragic event in Gurses’s life took place nearly a decade later, following his mother’s death. He had a traffic accident on his way back to Adana from the nearby Tarsus district, where he was touring Anatolia in 1978.

After the accident, Gurses, who was thought to be dead, was taken to a morgue and later was noticed at the last moment he was still alive and was taken into operation.

The legendary singer made his second breakthrough with his new albums in the 1990s.

Gurses’ 2006 collaboration with Turkish novelist and songwriter Murathan Mungan is one of the reasons his fan base changed. The album they made together, Ask Tesadufleri Sever (Love Loves Coincidences), features western musical instruments and reinterpretations of songs by such luminaries as Leonard Cohen, Bjork, David Bowie, and Bob Dylan.

During his nearly 44-year of career, Gurses released a total of 78 albums.

A movie titled “Muslum” telling the life story of the legendary singer was released in 2018.