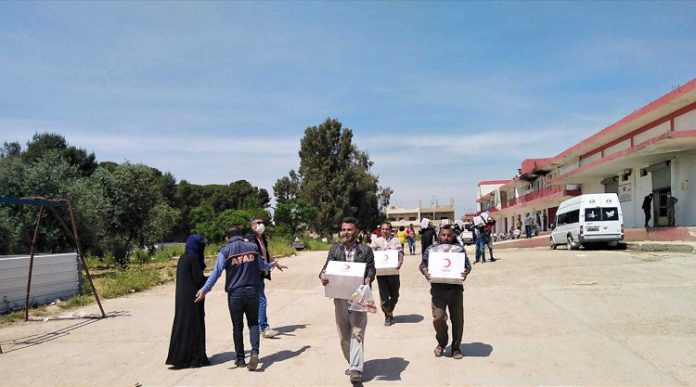 Muslims in two towns in northern Syria that were cleared of terrorists through Turkey’s Operation Peace Spring celebrated the Eid al-Fitr holiday marking the end of Ramadan in peace Sunday.

Thousands of people returned to Tal Abyad and Ras al-Ayn, and while there are homes and businesses that were heavily damaged by the civil war, there was a liveliness on the streets.

In addition to Turkish soldiers, soldiers of the Syrian National Army are providing security in the towns.

“We celebrate this Eid with a different happiness. Allah gave us a peaceful Ramadan after nine years of war,” said Mosa Homaini from Tal Abyad, underlining Turkey’s support to establish peace in the region.

Halil Askah said he met the needs of his 12-member family during Ramadan with aid sent from Turkey.

“We believe that we will have a good holiday after a peaceful fasting month because our region is now safe,” he said, thanking Turkey for the peaceful environment.

Osman Taacc, who returned to Ras al-Ayn after staying six years Turkey, said they had a peaceful Ramadan for the first time in years and are celebrating Eid with love and enthusiasm.

Tal Abyad and Ras al-Ayn were cleared of terrorists during Operation Peace Spring, which was launched on Oct. 9, 2019.

The military action was initiated to eliminate YPG/PKK terrorists from northern Syria east of the Euphrates River, to secure Turkey’s borders, aid in the safe return of Syrian refugees and ensure Syria’s territorial integrity.

In its more than 30-year terror campaign against Turkey, the PKK — listed as a terrorist organization by Turkey, the US and the European Union — has been responsible for the deaths of 40,000 people, including women, children and infants. The YPG is its Syrian offshoot.