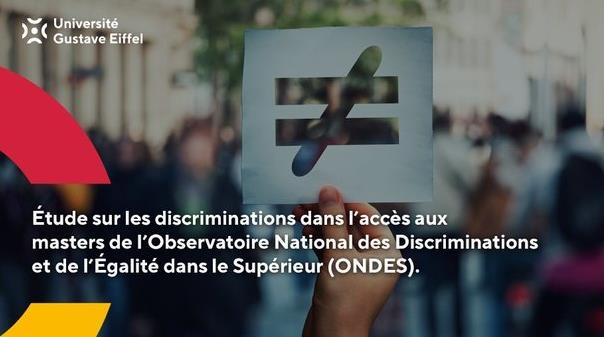 A recent study conducted in France revealed that those with a Muslim name and surname applying to graduate programs are discriminated against more than those with ethnically French names.

Researchers at both the Higher Education Discrimination and Equality Monitoring Agency (ONDES) and Gustave-Eiffel University sent more than 1,800 emails in March 2021 to the education directors of 607 graduate programs from 19 universities to test the latter’s discrimination against people with disabilities and those with foreign origins, according to local media.

The test was conducted by researchers with false names, for both those with disabilities and those without — used as test cases — to graduate program directors.

The directors whom researchers contacted claimed to embrace diversity in their applicants and did not prioritize people who come from a European background, but the researchers found otherwise.

Those with a Muslim name, the study found, were 12.3% less likely to receive a response to emails sent to each of their graduate programs. This rate was 33.3% in the field of law, 21.1% in the fields of science, technology and health, and 7.3% in the fields of language, literature, art, humanities and social sciences.

The researchers anonymously interviewed the same educational directors three months after the study concluded on behalf of the Ministry of Higher Education “about the difficulties they encountered in the process of recruiting students,” finding then the double-standard when it came to the directors’ desire to embrace diversity.

No discrimination was found for students who said they were physically disabled.

The rights of Muslims have been the subject of intense debate over the past decade in France as the country has struggled with violent extremist events like the Charlie Hebdo attacks of January 2015 that killed 12 people, followed by the horrific Bataclan attacks in November the same year in which 130 people died in one night of coordinated violence. Teacher Samuel Paty was beheaded in mid-October 2020 outside the middle school where he taught north of Paris. Thirteen days later, three people died at the hands of a knife-wielding man inside the Notre Dame basilica in Nice, one of them beheaded as well.

All were carried out by professed members of the Daesh/ISIS terrorist group.

Despite the separation of church and state being a founding principle of France’s democracy dating to the French Revolution, the government has a particular approach to its adherence to a secular ideology, and even a term for it: laicite. The somewhat hands-off perspective is meant to reinforce the true democratic principles of equality, tolerance and fairness while the state maintains a neutral stance and does not recognize religious differences between citizens.