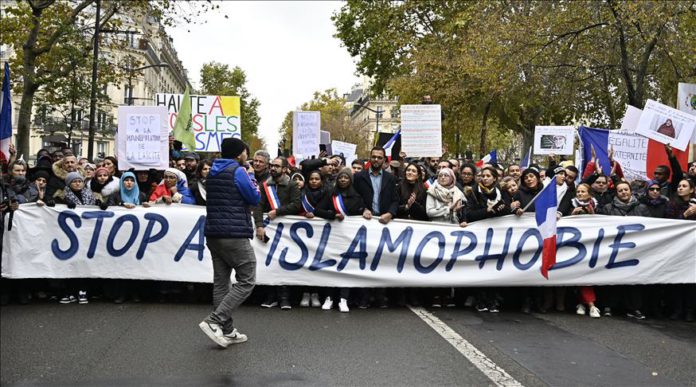 Straight after France was targeted by a series of terrorist attacks this fall, President Emmanuel Macron met with other EU leaders to address the bloc’s response to the threat.

Macron’s initial reaction included a promise to protect the right to caricature the Prophet Muhammad and even projection of the controversial Charlie Hebdo cartoons on public buildings in what he called to defend the freedom of expression in his country.

The world has stood by in shock after a knifing of two people outside the former offices of weekly magazine Charlie Hebdo in September, the beheading of teacher Samuel Paty in a Paris suburb in mid-October and the brutal killing of three people inside Nice’s Notre Dame basilica on Oct. 29.

The attacks have initiated French officials’ rather hasty ‘find a scapegoat’ approach and Muslims were on the target.

Critics say Macron’s government is exploiting the spate of violence to intensify his controversial anti-Muslim stance.

“I will not allow anybody to claim that France, or its government, is fostering racism against Muslims,” Macron claimed in an article by the Financial Times.

The paper had accused Macron of “stigmatizing French Muslims for electoral purposes” and fostering “a hostile environment” as well.

Dr. Andreas Krieg, assistant professor at the School of Security at the Institute for Middle Eastern Studies, Royal College of Defence Studies at King’s College London, said he is not surprised about the polarization in the country.

“Under Macron, France has taken a strong turn against Islam and Islamism beneath the banner of tolerance and liberalism,” he pointed out.

“France’s immigration policy based on assimilation rather than integration means that Muslims are forced to assimilate to a French secularist mainstream that has little tolerance towards other non-secular beliefs.”

This stance leads to alienation and identity insecurity among some Muslims, which, he argued, is the root cause for extremism.

France is home to the largest population of Muslims in Europe. Islam is the second-largest religion practiced in the country next to Catholicism.

On Oct. 2, Macron spoke on the proposal of a bill outlining separatism, and expressed that Islam was “in crisis throughout the world,” a claim which has been slammed by the leaders of many Muslim countries.

“This is what France is fighting against […] hatred and death that threaten its children, never against Islam. We oppose violent extremism, not a religion,” Macron, however, stressed to the FT.

The renewed attacks, and the debate, can be traced to the Charlie Hebdo massacre, a three-day terror spree in January 2015 where 12 members of the Charlie Hebdo satirical weekly were murdered by extremists in their offices in retaliation for running controversial cartoons on the publication’s cover; six others were also killed in the two days following.

The day before the start of trials for the attacks in September this year, Charlie Hebdo re-published the same inflammatory cartoons on its cover.

Later that month, a knife-wielding assailant gravely injured four people standing outside the former Charlie Hebdo offices. The attacker, of Pakistani origin, confessed to the stabbings, saying his targets were the magazine’s staff.

On Oct. 16, Samuel Paty, a 47-year-old teacher of history and geography at Bois-d’Aulne College in Conflans-Saint-Honorine, a suburb of Paris, was decapitated by Abdoullah Anzorov, an 18-year-old man of Chechen origin.

Anzorov murdered Paty in response to his showing profane cartoons of the Prophet Muhammad during a lesson on freedom of expression.

Abdallah Zekri, an official at the French Council for the Muslim Faith, said in a statement that Muslims “are neither guilty nor responsible. We shouldn’t have to justify ourselves.”

Muslim scholars like Khaled A. Beydoun, professor of Law at Wayne State University Law School and author of American Islamophobia: Understanding the Roots and Rise of Fear, saw Macron’s position as a negation of deeply held beliefs.

“Instead of tending to systemic inequities and framing the horrific murder of Samuel Paty as deviant, Macron tapped into France’s ugly and entrenched underbelly of Islamophobia to unleash new levels of hate against France’s Muslims,” Beydoun said.

Reaction to the murder was swift, with Interior Minister Gerard Darmanin vowing the government’s biggest crackdown ever on suspected extremists. He launched more than 80 investigations, arrested a dozen suspects and raided homes. The National Anti-Terrorism Prosecutor’s Office opened a probe and officials started dissolving 51 Islamic associations, notably the Collective Against Islamophobia.

“Divisions were inflamed, instead of using his perch to mend and frame the Paty murder for what it was: the vile act of one person, not 6 million Frenchmen and women.”

In a recent critique in Bloomberg Opinion, Pankaj Mishra asserted that in an increasingly multicultural world, Macron’s defense of the tradition of caricature and its unbridled freedom of expression signify a clash of civilizations.

“To put it soberingly, Macron has staked France’s global reputation on crude mockery of a figure revered by more than a billion Muslims.”

“Macron’s narratives have fueled radicalization among communities who feel unjustly targeted. He has singled out Islam as the single most important threat to France’s ‘way of life’, which in itself shows that French identity is too narrowly defined within the confines of a secularist tradition and leaves millions of French Muslims alienated and excluded from French identity.”