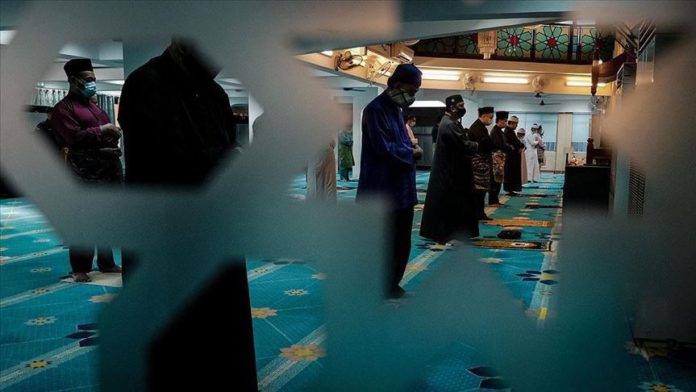 Eid al-Fitr, the holiday marking the end of the Muslim holy month of Ramadan, was celebrated worldwide Sunday under the shadow of the coronavirus pandemic.

Traditionally, the Eid is a three-day celebration, marked by large family festivities and mass prayers. But this year many can only celebrate at home with immediate family.

Some countries, including Turkey and Iraq, have imposed holiday curfews. But even where lockdowns have been lifted, celebrations are low spirited.

In Indonesia, which has the largest Muslim population in the world, many were forced to spend it away from their families due to travel restrictions.

In neighboring Malaysia, Muslims celebrated Eid with a limited number of people in mosques, giving up the tradition of shaking hands as part of the new coronavirus etiquette.

The mood in Pakistan was somber as besides virus-related deaths, Friday’s plane crash in Karachi, its largest city, saw the deaths of nearly 100 people. Mass prayers, however, were held in towns and cities amid an ease in lockdown.

In Afghanistan, people rushed to mosques in many regions as Taliban and government forces enforced a three-day cease-fire during the holidays.

Iran, which is battling the deadliest outbreak in the Middle East, allowed prayers at some mosques but canceled mass prayers in the capital Tehran led by Supreme Leader Ayatollah Ali Khamenei.

Similarly in Turkey’s neighbor Georgia, where the state of emergency and curfew have ended, Muslims prayed while wearing face masks.

The Balkans and Germany

While Muslims in Stockholm, the capital of Sweden, did prayers on a soccer pitch, prayer mats in the historical Old Mosque in Komotini, northeastern Greece, which has a large Muslim population were placed with a distance.

Muslims living in the Balkan countries of Bosnia-Herzegovina, Serbia, Montenegro, Croatia, North Macedonia and Albania also prayed in mosques with restrictions. Mass prayers in Kosovo and Slovenia, however, were not held. The same was true in Kazakhstan and Uzbekistan.

Muslims in Germany, where virus restrictions were eased earlier this month, performed special prayers in stadiums, sports halls, and open spaces, as well as mosques.

In Russia’s capital Moscow, only religious officials were allowed in the central mosque, with the prayers and sermon being broadcast live on TV channel Rossiya-1.