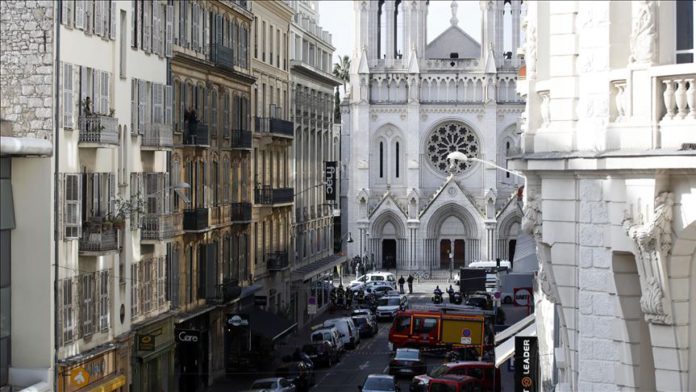 A leading global Muslim group condemned a deadly knife attack Thursday at a church in France.

“We received the news of the horrific crime that took place this morning in Nice, France, in which three people were killed,” the International Union for Muslim Scholars (IUMS) said in a statement.

The Doha-based group reiterated its call to fight any tendency toward extremism, violence and terrorism.

“The Union condemns and denounces this heinous barbaric crime, whoever does it, and whatever his motives and objectives, it confirms once again the innocence of Islam and the nation of Islam from this criminal act,” according to the statement that said such actions are forbidden and violate the principles and values of Islam.

The attack Thursday is the latest in a spate of terror acts gripping France amid growing tensions about anti-Islam measures.

The statement made an apparent reference to actions marginalizing Muslims when it said that group “[renewed] its call to Muslims in general, and in European countries in particular, to spare no effort in combating any tendency that tends to extremism, violence and terrorism, and to consolidate the approach of moderation, peace, compassion and harmony.”

Three people were killed and several wounded in the knife attack near the Basilica of Notre Dame de l’Assumption.

Police arrested the suspect, taking him to a hospital after he sustained gunshot wounds, according to local media.

The dead included one man and two women — two of whom were beheaded. Police confirmed that at least one person was decapitated.

In a separate incident Thursday, French police shot dead a knife-wielding man who reportedly threatened police in Avignon, according to media reports.