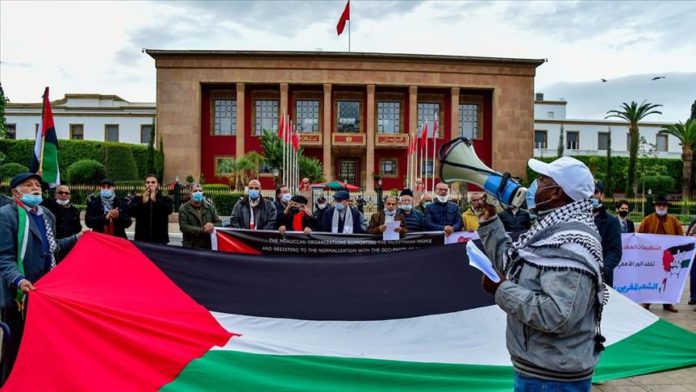 The International Union for Muslim Scholars (IUMS) said in a statement that the normalization deal “contradicts with the Moroccan people’s support for the Palestinian people.”

The Doha-based group said Israel still “occupies our Al-Aqsa Mosque, Jerusalem, our blessed lands [in Palestine] and the Golan Heights of Syria, and still looks to swallow more.”

The Arab Maghreb Scholars League (AMSL), for its part, called on Rabat to reconsider its decision to establish diplomatic relations with Israel. It called on the Islamic governments to resist any internal or external pressure to give up on the Palestinian issue.

In a statement, Morocco’s Royal Office confirmed that the country intends to resume official contacts and diplomatic relations with Israel “as soon as possible.” It, however, stressed that such move will not affect Morocco’s lasting commitment to support the Palestinian cause.

Following the signing of the Oslo accord in 1993 between the Palestinians and the Israelis, Morocco established low-level ties with Israel, but after the outbreak of Palestinian intifada (uprising) in 2000, it froze its relations with Israel.

Morocco became the fourth Arab country to normalize relations with Israel in 2020 after the UAE, Bahrain and Sudan.