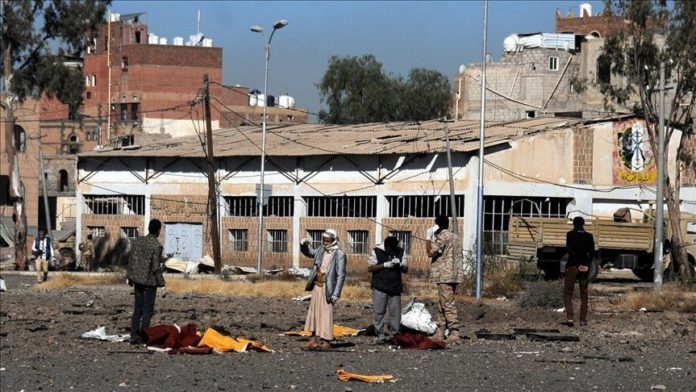 As armed clashes continue to escalate in the central Marib province, displaced Yemeni civilians are forced to abandon their refugee camps near frontlines to seek safety.

Ahmed al-Measar, 44, a father of six children, said he was forced to take refuge at five different camps as a result of the raging violence in the province.

“The first and most difficult displacement was in December 2015. It was very painful to leave our home, land and everything we owned. It took us seven days of travel on foot to reach Marib city,” al-Measar told Anadolu Agency.

Thousands of Yemenis have nowhere to flee but to relocate within the war-ravaged country, which has been beset by violence since Houthi rebels overran much of the country, including the capital Sanaa, in 2014.

The ongoing conflict has displaced at least 40,824 people during the first half of 2021, according to the International Organization for Migration (IOM).

From June 27 to July 3, a total of 81 households, which included 1,086 people, had been displaced at least once, the IOM said in a statement, citing that the highest number of displacements occurred in Dhale, Marib and Hudaydah provinces during this period.

Al-Measar and his family spent the last six years looking for a safer place between five different camps for internally displaced people (IDPs).
“When we arrived at Al Khaniq camp in August 2017, the camp lacked a lot of basic services,” the Yemeni father said.

“But after the intervention of humanitarian organizations, difficulties began to ease as shelter, food and schools were provided, but that did not last for long as the fighting resumed,” Al-Measar lamented.

In recent months, Iranian-aligned Houthi rebels have stepped up attacks in an attempt to take control of the oil-rich Marib province, one of the most important strongholds of the legitimate government and home to the headquarters of Yemen’s Defense Ministry.

Marib hosts approximately one million displaced Yemenis, one-quarter of around four million IDPs in the country, most of them have been sheltering in Marib in 130 different camps since the beginning of the conflict in 2014, according to the Executive Unit of IDPs, a government unit set up in 2009 to serve as a link between the government and international organizations supporting IDPs.

“As we were settling in Al Khaniq camp, Houthi forces attacked the camp in January 2020, killing and injuring a number of IDPs. Many families, including mine, had to flee to Madghal camp then to Al Suwaida camp where I am staying now since July 2020,” al-Measar said.

In February, Houthi rebels staged a new military operation in Marib in an attempt to capture the province.

According to Olivia Headon of the IOM in Yemen, four IDPs camps in the province have been abandoned since the start of the offensive.

In May, former UN envoy to Yemen, Martin Griffiths, warned that the continuation of military activities in several parts of the country, including Marib, was “undermining the prospects of peace in Yemen and puts the lives of millions at risk.”

For Al-Measar, his stay Al Suwaida camp, where he lives since July 2020, is the worst as IDPs experience “real suffering and tragedy”.

“For months, we did not receive any humanitarian response from the local authority, the Executive Unit for managing IDP camps, or human rights organizations. Everyone stood idly,” he said.

Amer al-Huneishi, 32, a father of ten children, is another victim of displacement in Yemen.

Being displaced four times since February 2016 from the Nehm area, northeast of Sanaa, al-Huneishi said whenever he and his family were about to settle in a place, they were forced to keep running away from war zones due to the non-stop Houthi attacks.

In IDP camps, especially in Al Suwaida camp in Marib, where al-Huneishi’s family has been living since August 2020, medical facilities are the worst.

“I have three children suffering from myasthenia gravis and brain atrophy, but I cannot find the right treatment in the camps as they are provided only with first aid facilities,” al-Huneishi said.

The only available option for the treatment of al-Huneishi’s children is hospitals in Marib city or Sayun city, around 436 km far from the camp.
“I cannot afford their treatment given the fact that I have been out of work for years,” he said.

As the fighting continues in Marib, there is still a high possibility for new waves of displacements. IDPs could manage to escape from the hell of fighting, but they are still facing the suffering of displacement.

“Those who do not die from bombing, die from severe cold and frost, poverty, hunger, thirst, heat, flood, and diseases,” al-Measar said.

In 2020 alone, approximately 172,000 people became uprooted, giving Yemen the fourth largest number of IDPs in the world, according to the UN.