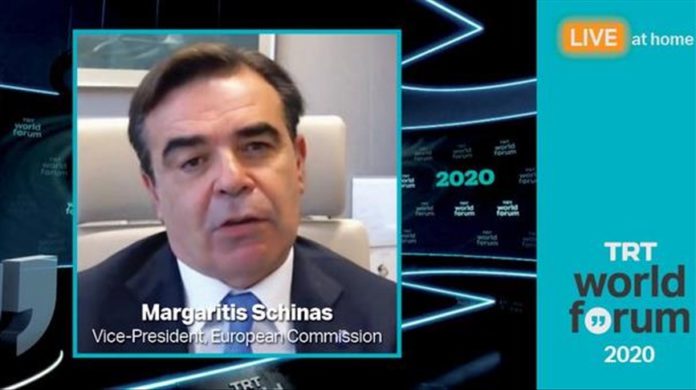 The EU commission’s vice-president on Tuesday hoped international actors would incline toward multilaterals in the post-virus period.

Margaritis Schinas was speaking at the TRT World Forum 2020, which is being held online this year due to the COVID-19 outbreak.

He talked about the policies followed by EU member states to tackle the novel virus, and what the future holds for the political arena.

Schinas said anti-virus measures were initially shaped by public pressure; however, leaders soon realized they shared many similarities and the mutual dependency of economies and supply chains became evident.

The world would become more multilateral once the virus threat is eliminated, he said, arguing that it is “inevitable” as all countries have become aware of the importance of international cooperation.

According to the Greek politician, the election of Joe Biden as the US president would play a significant role in the shift towards global governance.

Another leading factor that would boost multilateralism, he said, is advances in health sciences, which would be led by the World Health Organization.

The EU official also commented on the issue of migrants and refugees, saying the 27-member bloc is working on a new migration pact considering three approaches: closer cooperation for neighbors and countries on migration route, ways to strengthen border and maritime security policies, and fair burden-sharing in hosting migrants.

He thanked Turkey – the world’s top refugee-hosting country – for its efforts to tackle the issue of illegal migration, and said that the EU would fully support Ankara in the coming days.