TurkishPress
Home News Mucilage has not descended to Sea of Marmara depths: Study 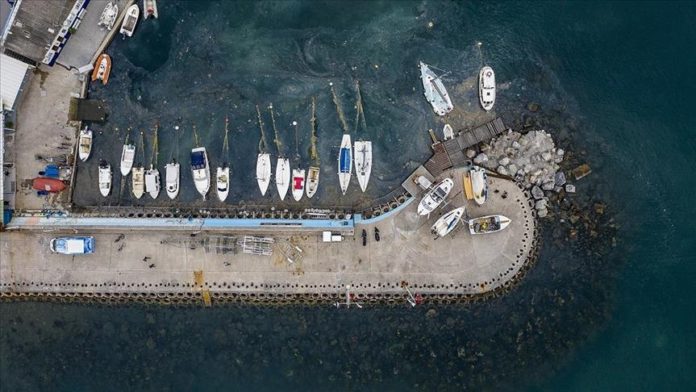 Studies have shown that mucilage in the Sea of Marmara has not yet descended to the lower depths of the sea in northwestern Turkey, a marine sciences institute in the country said on Monday.

METU Marine Sciences Institute also said that levels of hydrogen sulfide, a product of bacterial degradation, were below the minimum needed to accurately measure the substance, and that the smell of rotten eggs which it causes were not present in the samples collected.

Mustafa Yucel, deputy director of the institute, told Anadolu Agency that the Bilim-2 (Science-2) vessel continues to collect data from 100 stations in the Sea of Marmara as part of an ongoing project for an integrated modeling system of the sea.

Yucel said they had conducted detailed measurements of hydrogen sulfide and oxygen with multiple methods in the Cinarcik basin on the Sea of the Marmara’s eastern coast.

“It was among our first results that mucilage accumulates in the first 30-meter (about 100 feet) layer of the sea and has not yet descended into the lower waters,” Yucel said.

He said the team had also confirmed that still, very little oxygen penetrates the sea’s deepest regions, around 1,200 meters.

“We’ve seen that there’s no structure that can continuously accumulate hydrogen sulfide at the bottom of the Marmara,” he noted.

Yucel emphasized that with the reduction in terrestrial nutrient loads with the Marmara Action Plan against the increase in mucilage, also known as sea snot, they anticipated that a significant part of the depths, including the Cinarcik basin, will begin to re-oxygenate with new water coming from the Mediterranean Sea.

UN launches study on children deprived of liberty in SADC