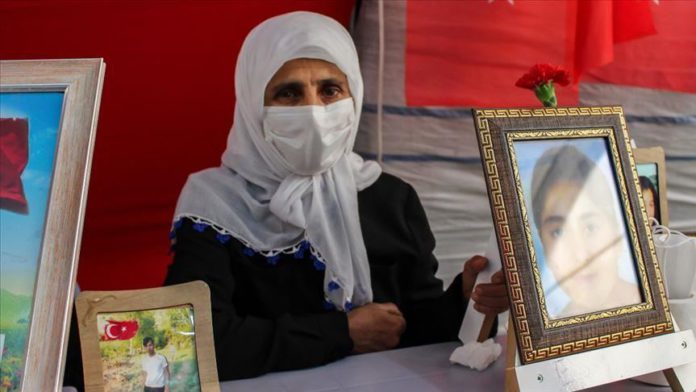 A sit-in on Wednesday by the families of children who were forcibly recruited by the terrorist organization PKK entered Day 436.

Esmer Koc, the mother of Zubeyde Koc who had been abducted in 2013 at the age of 15, said she wanted to reunite with her daughter.

“We have been protesting for more than a year. I am here for my daughter Zubeyde. I only ask this of her: if you can hear me, come and surrender to the government. That is no place for you. We don’t want PKK,” Koc said.

Suleyman Aydin, the father of Ozkan who had been abducted by terrorists five years ago at the age of 15, addressed his son, saying: “My son, turn yourself in to the security forces, let this longing end.”

“The mothers of Diyarbakir are doing the right thing,” said Ahmet Kabadayi, the chairman of the local non-profit group National Unity and Fraternity Federation, who visited the protesting families to extend support. “They have been waiting at this door for months and they have saved almost 20 people from terrorists.”

The protest began on Sept. 3, 2019, in the city of Diyarbakir when three mothers said their children had been forcibly recruited by YPG/PKK terrorists. The sit-in outside the office of the Peoples’ Democratic Party (HDP) — which the government accuses of having links to the terrorist YPG/PKK — has been growing every day.

In its more than 30-year terror campaign against Turkey, the PKK — listed as a terrorist organization by Turkey, the US, and EU — has been responsible for the deaths of some 40,000 people, including women, children, and infants.

20 workers dead in Afghanistan mine collapse

Turkish stocks up 0.12% at Tuesday's open