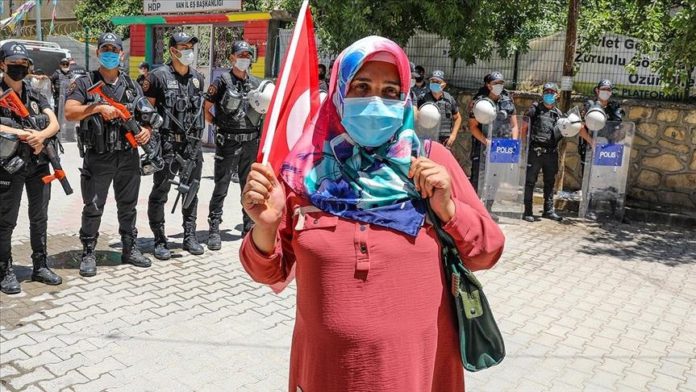 Successful efforts by Turkish security forces to reunite a mother from Van province and her daughter who was abducted by the PKK terror group gave hope to other families waiting for their children’s return.

Atiye Dayan was protesting outside the office of opposition Peoples’ Democratic Party (HDP), which the government accuses of having links to the PKK.

The surrender of her daughter, S.D., 17, who was abducted in 2009, delighted not only her mother but the families of other children.

Although she received is not reunited with her daughter, Dayan continues to protest outside the HDP building every Thursday to support other families.

Dayan told Anadolu Agency that she is “the biggest of proof” that “mothers will win,” and the number of families protesting increases in all provinces day by day, including Van.

The protests in Van started with seven families and currently stands at 32, she said.

“Our protest will continue until we take all of our children and we will not give up on our decision,” said Dayan.

“Mothers will win, I am the biggest proof of this. I have been reunited with my daughter, whom I have not heard from for years, and who has been held captive in dungeons for years,” she said, expressing how grateful she is for her daughter’s return.

“The children of other families are like my children,” she said. “The pain is one.”

Dayan called on families going through the same situation to join the protest and urged children who have been abducted or forcibly recruited by the PKK to surrender.

“The PKK is over and is looking for a cure. Don’t let it use you,” she said.

‘We want our children from HDP, PKK’

Vehbi Tan, who joined the protest for his abducted brother, Ergin, and said his family has not heard from him for seven years.

He said mothers reuniting with their children raise the morale of protesters.

“A mother who has reunited with her daughter continues to protest with us. This is great support for us,” he said.

“We will continue to protest even if we reunite with our children,” said Tan. “We want our children from HDP and PKK.”

Gulbahar Teker from Mus province said she was happy as if it was like she was reunited with her son during the reunion.

“These developments increase our hope,” she said and demanded her son’s return.

Families in the Diyarbakir province have protested outside the HDP building since Sept. 3, 2019, encouraging their children to give up their weapons and surrender to authorities.

US vows to stand by Afghan gov't after Taliban demands Ghani...