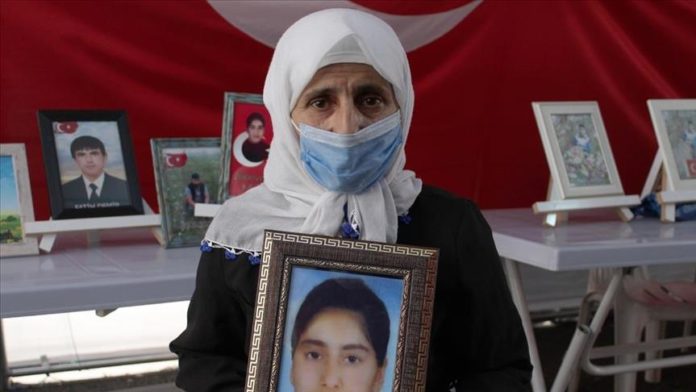 A mother is learning how to read and write during the ongoing sit-in protest against the PKK terror group in Turkey’s southeastern Diyarbakir province on Wednesday.

The protest began on Sept. 3, 2019 in Diyarbakir, when three mothers said their children had been forcibly recruited by YPG/PKK terrorists.

Esmer Koc, a 56-year-old mother, has been taking classes from Aysun Adiyaman, a sister who has been waiting for her brother Hamza to return from the PKK for the past four years.

In addition to their resolute struggles, families during their sit-in protests show an example of solidarity. Some mothers knit while they dream of the day that they are going to meet their children, some read the Muslim holy book of Quran, while others read books.

Koc’s daughter Zubeyde was kidnapped from the southeastern Hakkari province seven years ago when she was 15 years old, Koc told Anadolu Agency.

She has been waiting for her daughter for years now, she added.

Expressing that they are fighting decisively with other mothers, Koc said they will continue their actions for their children until the end.

Koc said she was illiterate and with the help of Adiyaman she had started to learn how to read and write, adding that she did not have the opportunity before and that she was grateful now.

“Hopefully, my daughter will come and start school and throw away the dirty gun and surrender to the Turkish soldiers,” she said.

She stressed that her daughter was dragged away from school by terrorists and that once her daughter surrenders she will take her back to school.

Adiyaman said she has been waiting for her brother Hamza for four years when he was kidnapped at the age of nine.

She said the threatened mothers and fathers would no longer remain silent against the HDP and its supporters.

“I saw that aunty Esmer was trying somehow and wanted to learn. I wanted to help. She is very enthusiastic and willing. I hope she learns how to read and write,” she said.