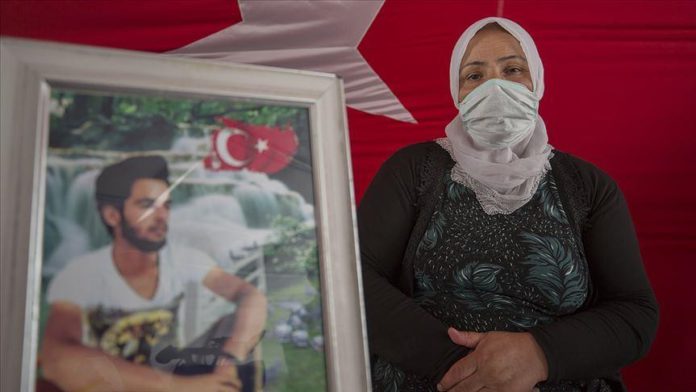 With the PKK’s bloody terror campaign continuing to victimize countless lives in Turkey, mothers of those forcibly recruited by the terrorist group launched a sit-in in 2019 to bring back their children.

Hundreds have joined the sit-in in Diyarbakir, southeastern Turkey, including Necibe Ciftci, a mother who lost two of her sons to the terror group.

Ciftci said her son Rojhat was only 17 years old when he was tricked into joining the terror group. Although this alone was a tragedy difficult to bear for any caring mother, the coming days proved her suffering had only begun as the worst was yet to come.

“He was 17 years old in 2015 [at the time of his abduction]. There were 15 days left before schools opened. We had bought all his [school] clothes, his tie, his shoes,” she said.

Although she was growing impatient to watch her son grow into a man with a proper education, Rojhat was tricked by PKK affiliates in Hakkari province.

“My son went to Semdinli [district of Hakkari province] to his uncle. They were sitting in a park. HDP [Peoples’ Democratic Party] and PKK militants sat by them and tricked the children. They took my in-laws’ son and mine together and handed them over to the PKK at a mountain,” she said.

Upon hearing about the disappearance of her son, Ciftci was devastated for a while, as she felt that all the difficulties she faced while raising her son were in vain. But she quickly recovered and hit the road, looking for her beloved child. She did not bow down to the threats of terror affiliates because she was willing to pay the ultimate price if need be: dying for her cause so other mothers would not go through her suffering.

Inspired by her courageous acts defying the terror group’s forced recruitment methods, Sami Ciftci – her 30-year-old elder son and a father of four – joined her, and the two began to travel between eastern Turkish provinces in pursuit of Rojhat. Yet little did they know that the family was about to be stabbed in the chest by the PKK once again.

One day, heavily armed PKK terrorists raided their village in Hakkari province to send a message to the family and anyone else thinking of looking for their children and inflicting a blow on the terror group’s recruitment process. The terrorists surrounded their house first and then took Sami to a stable, ignoring the tears and begging of his children and mother.

“They surrounded our house, and four of them got in…They came inside and pulled my [other] son among children, took him to a stable and executed him after tying his hands,” Ciftci said.

According to Ciftci, the execution of her son proved that the PKK has no interest in protecting the rights of Kurdish people, a claim often made by the terror group, as they killed her son in cold blood after he refused to support the organization and did not give up on his brother.

“My son, your brother was taken outside and executed by the PKK,” she said, also pointing her finger at the HDP which, according to her, also played a role in his abduction.

“My son, that is what the PKK did to your brother. Come back, my son. Come back for God’s sake. Enough is enough. Come and take care of your brother’s orphans.”

While the terror group probably assumed the family would finally give up and not be a nuisance anymore, the weeping mother had other plans, as now she had “nothing to lose.”

She joined a sit-in protest in southeastern Diyarbakir.

Three mothers who said their children had been forcibly recruited by PKK terrorists began protesting outside the provincial offices of the HDP on Sept. 3, 2019, and it has been growing since then.

Ciftci said she joined the protest to “open the eyes of her brainwashed son” and ensure his return and keep her deceased son’s memory alive so other families would stand against the terror group.

She also condoled with the families of Turkish nationals who were executed earlier this month by PKK terrorists in Gara, northern Iraq, saying: “I know their pain. I have suffered the same pain. May God have mercy on their children and give patience to their parents.”

In its more than 35-year terror campaign against Turkey, the PKK — listed as a terrorist organization by Turkey, the US and the EU — has been responsible for the deaths of 40,000 people including women, children and infants.