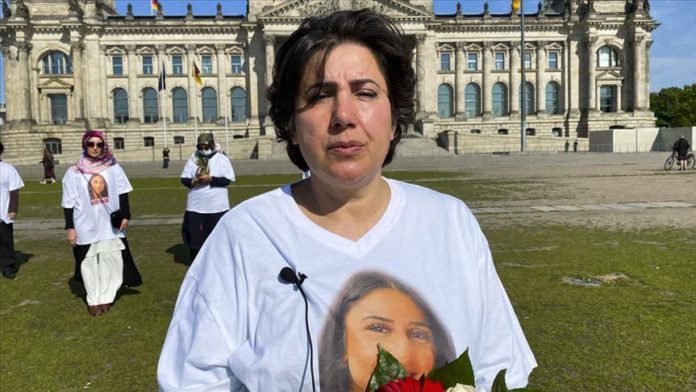 A mother in Germany whose child was kidnapped by the PKK terror group, urged her daughter to return home as she continues to demonstrate in front of the federal parliament (Bundestag) building.

Maide T. told reporters she did not receive a call from her daughter, Nilufer T, on Mother’s Day and does not expect a call next week for Eid-ul-Fitr, which marks the end of the Muslim fasting month of Ramadan.

“The terrorist organization PKK has no beliefs, no values. They don’t care about festivals, important days. They claim that they care about mothers. If this was true, my daughter would’ve called me on Mother’s Day. I doubt that they’ll let my daughter call me on Eid al-Fitr. I hate the PKK,” she said.

The elder T said she applied for permission to continue her demonstration in front of the Federal Chancellery to make her voice heard by German Chancellor Angela Merkel and she appealed to mothers to support her cause.

“I call on to all mothers who are going through the same: our children are our world. Do not be afraid of this heinous organization who took your children from you. Come and support me, and let’s fight together,” she said.

Women from the International Union of Democrats and Patriotic Party’s Women’s Organization in Berlin supported the protest.

In its more than 30-year terror campaign against Turkey, the PKK — listed as a terrorist organization by Turkey, the US and European Union — has been responsible for the deaths of 40,000 people, including women, children and infants. The YPG is the PKK’s Syrian branch.