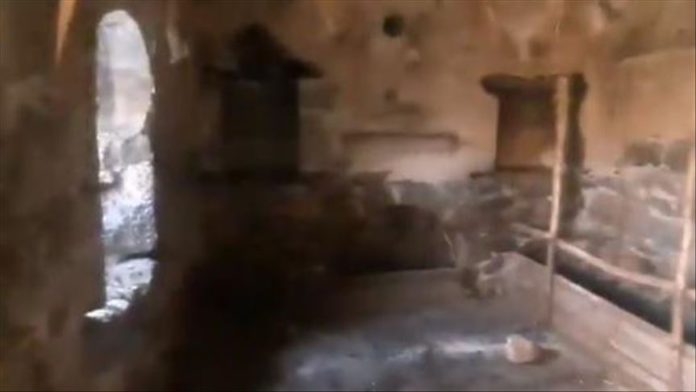 The Gubadli region, where the mosque is located, was liberated by the Azerbaijani army on Oct. 30.

“XVIII Century Mosque in liberated Mamar village of Azerbaijan. Mosque was completely destroyed. Along with vandalism XVIII Century religious/cultural monument as sign of insult was transformed into pigsty by Armenia during occupation of Mamar village of Gubadly region,” said Hikmet Hajiyev, assistant to the Azerbaijani president, on Twitter.

Hajiyev called on UNESCO, the Islamic World Educational, Scientific and Cultural Organization (ICESCO) and the Organisation of Islamic Cooperation (OIC) to take action against Armenia and “seriously condemn these barbaric acts”.

Earlier, a video shot by a mobile phone showed another historical mosque in Zangilan area, also under Armenian occupation until recently, converted into a pigsty. The area was liberated by the Azerbaijani army on Oct. 20.

Fresh clashes erupted on Sept. 27, and since then Armenia has repeatedly attacked Azerbaijani civilians and forces, even violating three humanitarian cease-fires.

At least 92 civilians including 11 children have lost their lives, according to Azerbaijan’s Chief Prosecutor’s Office. More than 400 people have been wounded; among them dozens are children.

Several thousand houses and residential buildings have been raised to the ground in these attacks.