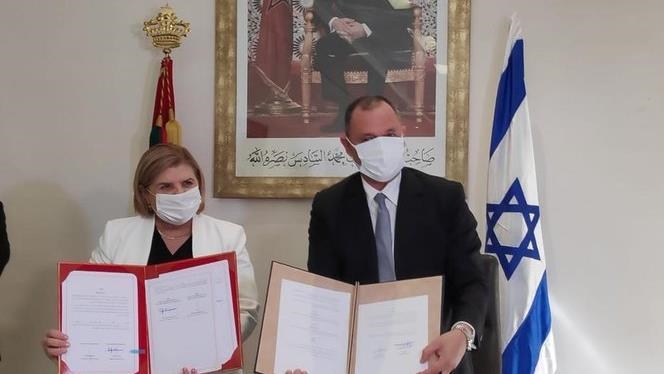 Relations between Morocco and Israel have been growing since the two countries signed a US-sponsored deal to normalize their ties in late 2020.

On Sunday, Israeli Minister of Economy and Industry Orna Barbivai arrived in the Moroccan capital, Rabat, in the latest visits by Israeli ministers to the North African nation.

Barbivai “will meet with a group of political and economic figures with the aim of strengthening partnerships between the two countries,” Israeli Ambassador in Rabat, David Govrin, tweeted.

According to the Israeli Ministry of Economy and Industry, Barbivai will meet with his Moroccan counterpart Riad Mazur on Monday.

Relations between Tel Aviv and Rabat began at a low level in 1993, after the signing of the Oslo Accords between the Palestine Liberation Organization and Israel.

On Dec. 10, 2020, the two countries announced the resumption of diplomatic relations after they were suspended in 2000 following the outbreak of the second Palestinian Intifada.

Morocco was the fourth Arab country to agree to normalize ties with Israel in 2020 after the United Arab Emirates, Bahrain, and Sudan.

Since signing their normalization agreement, Morocco and Israel inked four agreements in the economic, commercial and tourism fields.

Last week, Barbivai said “the trade volume between Israel and Morocco reached $131 million in 2021, of which $31 million in exports and $100 million in imports.”

She said Israel’s main exports to Morocco include transportation products, rubber, plastic and chemical products, while imports include textile, agricultural and transport products from Morocco.

In 1999, trade between Morocco and Israel amounted to about $50 million with about 50,000 Israelis visiting the North African nation that year, according to the Israeli liaison office in Morocco.

On September 22, 2000, 24 Israeli companies specialized in agricultural technologies sent representatives to Morocco at the invitation of the kingdom’s Chamber of Commerce, Industry and Services.

Following their normalization agreement, Rabat and Tel Aviv held discussions into the prospects for industrial cooperation and partnership in five industrial sectors, including the textile and food industries, applied research in industry, green technology, and renewable energy.

On January 26, 2021, David Govrin, Israel’s charge d’affaires in Morocco, was appointed the country’s ambassador in Rabat.

In March, business people from Morocco and Israel signed a strategic partnership agreement to strengthen economic and trade relations.

In a bid to promote tourism, the two countries signed a joint marketing agreement in July last year, which included the opening of travel agencies.

Officials expect that the number of Israeli tourists to Morocco will rise to 200,000 annually, from an average of 50,000 in the past.

Earlier this month, the Moroccan government referred to Parliament a draft law to ratify an agreement signed with Israel related to international services.

The agreement states that the two sides affirm their grave concern about actions or threats against civil aviation security, which endanger the safety of persons or property.

It also includes provisions related to mutual exemption from customs duties, inspection expenses and taxes that are not related to the cost of services provided on board the aircraft.