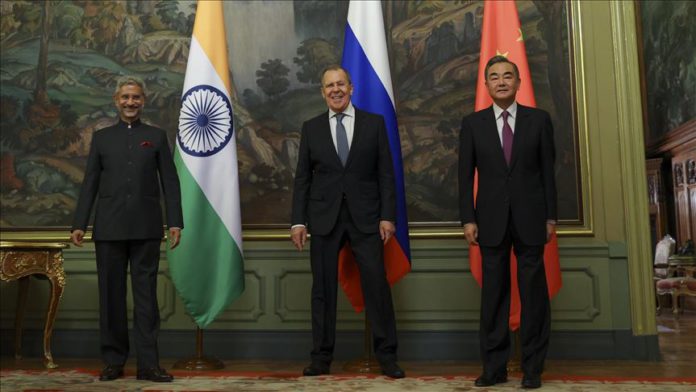 As India and China’s foreign affairs ministers met Thursday in Moscow, political experts and commentators say the meeting could now help in easing the tensions between the two countries, which remain in a standoff on the Himalayan border.

A joint statement early Friday had said that India and China agreed to quickly disengage their troops at the disputed border amid months-long ongoing faceoff.

Experts in India say the Moscow meeting has some positive takeaways and it looks that neither side wants a further escalation of the tensions.

“I think it [the meeting] was not negative. At least, there is recognition from both sides that tensions shouldn’t increase which is very important. It looks like both sides don’t want the situation to deteriorate further and they don’t want an escalation,” Vijay Nambiar, a seasoned diplomat and former envoy to China, told Anadolu Agency.

He said while it is unlikely that disengagement between the two countries will take place “straightway,” it will be a “cautions disengagement” if it takes place.

Indian and Chinese troops are in a heightened faceoff along the Line of Actual Control, a de facto border near the Himalayan region of Ladakh in the disputed Jammu and Kashmir, where 20 Indian soldiers were killed this June. Since then, a series of meetings have been conducted between the two countries but without success.

In Thursday’s meeting, the two countries agreed on five points which could ease the ongoing tensions.

“First they agreed to issue a joint statement, otherwise each side would interpret the meeting outcome differently. Secondly, it has created positive vibes for high-level diplomatic meetings to decide on disengagement,” he said, adding that both sides realize that new confidence building measures are needed to avoid a future standoff.

Ranjan, however, says while “nothing concrete has come up for disengagement they have reiterated that they will abide by the guidance of leaders and continue the dialogue and communication”.

New Delhi-based Jagannath Panda, a research fellow and Centre Coordinator for East Asia at the Manohar Parrikar Institute for Defence Studies and Analyses, told Anadolu Agency that the meetings between the foreign ministers indicate that both parties are serious about not further escalating the conflict.

“The challenge is if FM meetings followed by defense ministers’ meetings will bring this breakthrough when military tensions are so serious. With Jaishankar’s expertise in dealing with the Chinese, these talks can be expected to provide temporary respite to the ongoing tensions,” he said, adding that “the defense ministers’ talks were meant as a strategic necessity to rebuild a political platform for finding consonance.”

Solution only through talks

Ranjan said the solution of the present standoff lies in the talks only.

“I think the matter will be resolved through diplomatic/political channels because military talks held previously have not yielded any result,” he said.

According to Ranjan, it is time for a meeting between the heads of the two countries.

“We previously have seen the Doklam standoff ended to create a conducive environment for an informal meeting between Indian Prime Minister Narendra Modi and Chinese President Xi Jinping in Wuhan and the BRICS Xiamen Summit. I think it’s time again for those levels of talks to defuse the tensions,” he said, referring to the 2017 standoff in the Doklam area along the Indian state of Sikkim’s border with Bhutan.

Chinese commentators also believe that the meeting shows that the highest levels of the two governments are unwilling to further escalate conflicts.

“The joint statement showed that under the current situation, the highest levels of the two governments are unwilling to further escalate conflicts as the de-escalation of tensions will be conducive to the two countries’ interests,” Qian Feng, the director of the research department of the National Strategy Institute at Tsinghua University in Beijing, was quoted by Global Times as saying on Friday.