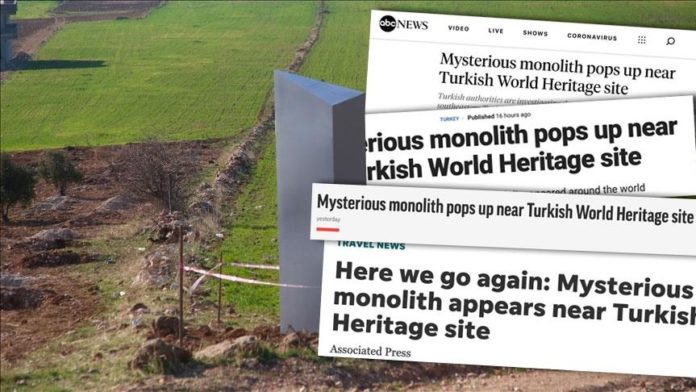 A mysterious monolith, or metal slab, that recently popped up in southeastern Turkey’s Sanliurfa province has attracted the attention of the American and European press.

The New York Times gave the issue a spot on Monday with the headline, “Monoliths Are Still Happening”. “The latest unexplained metal slab was found in Turkey, and it is now surrounded by armed guards,” it added.

The newspaper also mentioned the inscription in Gokturk, an ancient Turkic script, which reads: “Look at the sky, see the moon.”

Reuters went for “Turkey’s ‘mysterious monolith’ at Gobeklitepe, an ancient temple in Turkey and a UNESCO World Heritage site, draws local attention” as a caption for its half-minute video on the monolith. Turkey had declared 2019 the Year of Gobeklitepe.

For its part, the Associated Press led its coverage with “Mysterious monolith pops up near Turkish World Heritage site” with an image showing the monolith guarded by Turkish soldiers. The agency also mentioned that similar cases have been seen across the world.

A German newspaper, Süddeutsche Zeitung titled its coverage with “Aliens in Anatolia,” calling Gobeklitepe “Stonehenge of Turkey,” referring to a prehistoric monument in Wiltshire, England.

The 3-meter-tall (9.8-foot) metal pillar was found on Feb. 5 in the middle of an empty field in Gobeklitepe, home to the world’s oldest temple site. Locals on Tuesday noticed it was not there anymore.

When it first appeared at the historic site, many citizens visited the site to see the metal pillar. Residents of the neighborhood said they are afraid, and expect the officials to find more about it.

It is still not known who installed, and then removed the monolith.

*Beyza Binnur Donmez from Ankara contributed to the story.