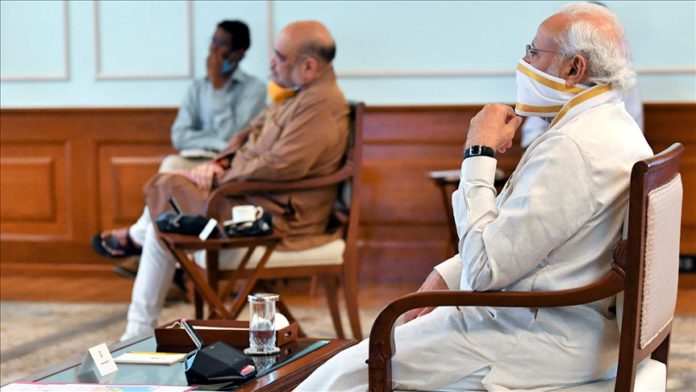 Modi’s Hindu nationalist government in August 2019 downgraded the region’s special status, and split it into two federal territories. The move was followed by a military and communications lockdown, and arrest of political leadership.

The Muslim-majority region is held by India and Pakistan in parts and claimed by both in full. Since partition in 1947, they have fought three wars, two of them over Kashmir. Some Kashmiri groups have also been fighting against Indian rule for independence or for unification with neighboring Pakistan.

Some of the local parties have formed an alliance known as People’s Alliance for Gupkar Declaration, seeking the restoration of the region’s political autonomy.

Mufti, the president of People’s Democratic Party, said she told the prime minister during the meeting that the region’s semi-autonomous powers should be restored.

She added that her party and the people of Jammu and Kashmir “will struggle constitutionally, democratically, peacefully. Whether its takes months or years, we’ll restore Article 370 in Jammu and Kashmir as it’s a matter of our identity.”

Omar, the vice president of the National Conference Party, said he told Modi “we’re not ready to accept” the 2019 changes. “But we won’t take the law into our hands, we will fight this in court, and hope that we’ll get justice in the court.”

The constitutional changes – abrogation of Articles 370 and 35A – were soon challenged in the Supreme Court, and the matter is still pending.

“The prime minister asked us to participate in the delimitation process, and we have been assured that this is the roadmap toward elections,” said Altaf Bukhari, who heads the regional Jammu and Kashmir Apni Party. “The prime minister said he is committed to the restoration of statehood.”

Azad, who is a senior leader of the main opposition Indian National Congress, said they put forth five demands which included the restoration of the region’s statehood, release of political prisoners, protections on land and jobs for the local population, and elections.

“Overall restoration of state and holding elections, this was by and large the consensus,” Ghulam Ahmad Mir, chief of the Congress party in Jammu and Kashmir who also attended the session, told Anadolu Agency.

He said the meeting was held in a cordial manner, and the prime minister heard the leaders “very patiently.”

Meanwhile, Modi, in a tweet, said the meeting “is an important step in the ongoing efforts towards a developed and progressive J&K.”

“Our priority is to strengthen grassroots democracy in J&K. Delimitation has to happen at a quick pace so that polls can happen and J&K gets an elected Government that gives strength to J&K’s development trajectory,” he wrote in another post.