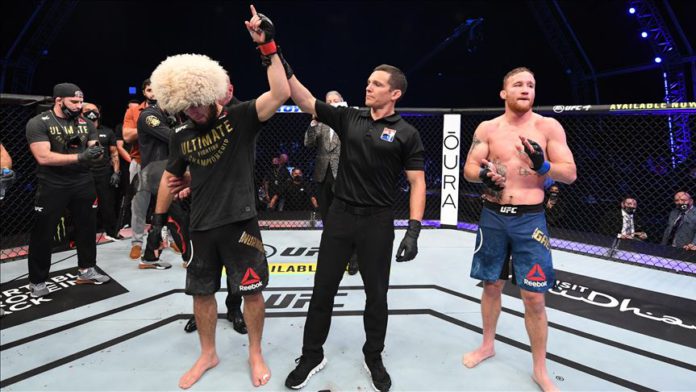 Nurmagomedov successfully defended his UFC lightweight title and extended his unbeaten record to 29-0 with a second-round victory in Abu Dhabi.

The match lasted 01:34 seconds into the round.

“God give me everything, and with my father, I love you so much, it was my last fight, when UFC called me about Justin, I talked to my mother, I promised her it would be my last fight,” Khabib said a post-fight interview.

“Thank you to all this UFC team, everybody around the world, thank you so much Justin, you helped me a lot. I know you’re a great man. Today is my last fight in the UFC. It was my father, what else is there to prove? McGregor and Poirier fight in January, I choked out both of them, I’m not interested in this,” he added.

Nurmagomedov, from Russia’s northern Caucasus Republic of Dagestan, is the first Russian and first Muslim to win the UFC lightweight championship.

The 32-year-old beat Conor McGregor from Ireland in Las Vegas, Nevada in a 2018 lightweight title fight.

Nurmagomedov lost his father and coach, Abdulmanap Nurmagomedov, to the coronavirus in July.

January 26, 2022
MOSCOW Russia must "provide support" to Ukraine's breakaway regions of Donetsk and Luhansk "in the form of supplies of certain types of weapons" to strengthen...

Qatari emir to meet US president next week: White House

January 25, 2022
KYIV, Ukraine  Ukraine’s parliament, the Verkhovna Rada, called on the international community Tuesday to prevent Russia from using blackmail and threats of a full-scale invasion...

January 25, 2022
Houston, TEXAS  The United States Coast Guard is currently on a frantic search looking for survivors, after a boat capsized off the east coast of...