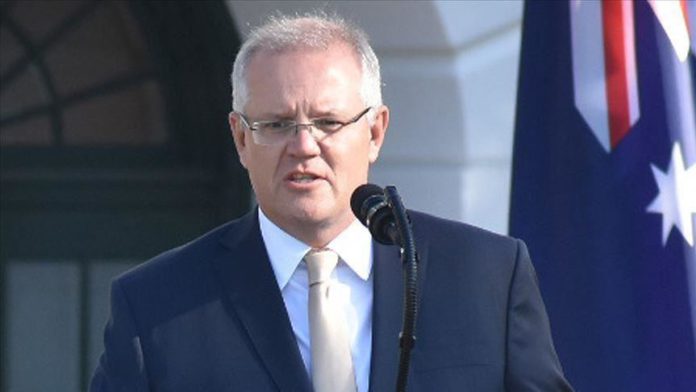 In a fresh attempt to mend bilateral ties, Australia on Tuesday extended an olive branch to China, saying it wants “happy coexistence” with its largest trading partner.

In a virtual address to the UK’s Policy Exchange think-tank, Australia’s Prime Minister Scott Morrison acknowledged there are “undeniable tensions” in the Australia-China relationship, many of which are based on “some misunderstandings.”

“Our end result from Australia’s point of view is not containment, our end result is happy coexistence, respecting each other’s sovereignty and systems,” he said. “Australia desires an open, transparent and mutually beneficial relationship with China as our largest trading partner, where there are strong people-to-people ties, complementary economies and a shared interest especially in regional development and wellbeing.”

Australia and China have witnessed bilateral relations nosediving in the past few months after Canberra sought a probe into origins of the COVID-19 pandemic. The novel infection was first reported in China’s Wuhan city last December, and has since spread across the globe with over 59 million cases and over 1.2 million deaths.

The development comes after China shared a 14-point dossier – a list of grievances – with Australia.

“China is angry. If you make China the enemy, China will be the enemy,” a Chinese government official said last week in Canberra.

The list includes government funding for “anti-China” research at the Australian Strategic Policy Institute, raids on Chinese journalists and academic visa cancellations, “spearheading a crusade” in multilateral forums on China’s affairs in Taiwan, Hong Kong and Xinjiang, calling for an independent investigation into the origins of COVID-19, banning Huawei from the 5G network in 2018 and blocking 10 Chinese foreign investment deals across infrastructure, agriculture and animal husbandry sectors.

“If Australia backed away from policies on the list, it would be conducive to a better atmosphere,” the Chinese official had said.

Although the two sides have publicly rebuked each other over several issues, backchannel diplomacy has apparently fallen silent.

Morrison said he was “happy to have a discussion” with the Chinese about the list of 14 complaints, but it requires the communication lines “to remain open.”

Challenges due to US-China trade war

The premier said the ongoing tensions between China and the United States has presented new challenges and complexities, especially for nation-states in the Indo-Pacific region, and pursuing Australia’s national interests amid this “strategic competition” is not “straightforward.”

He argued that Australia’s preference “is not to be forced into any binary choices.”

“Our actions are wrongly seen and interpreted by some only through the lens of the strategic competition between China and the United States,” Morrison said. “It’s as if Australia does not have its own unique interests or it’s own views as an independent sovereign state.”

He hoped “the atmospherics” will change following the change in the US administration.