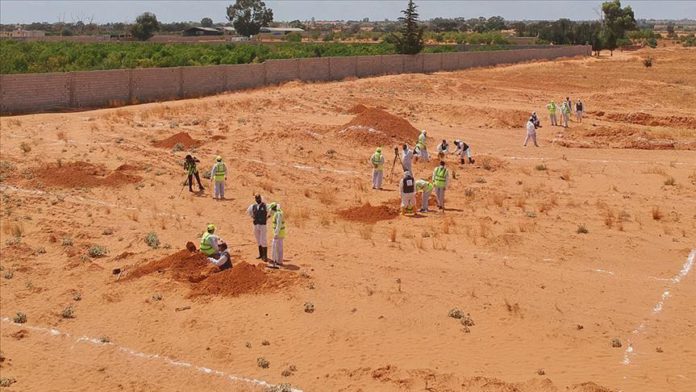 An Anadolu Agency team in Libya has monitored the evidence of mines, mass graves, and executions left behind by the militias of warlord Khalifa Haftar as they retreated from south of the capital Tripoli as well as the city of Tarhuna, to the southeast.

This March, the Libyan government launched Operation Peace Storm to counter attacks on the capital, and recently retook strategic locations, including Al-Watiya airbase and the city of Tarhuna, Haftar’s final stronghold in western Libya.

Haftar militias and mercenaries working with Russia’s Wagner Group left behind booby-trap mines and improvised explosives that prevented civilians from returning to their homes, as well as a large number of mass graves and corpses that could be considered war crimes by international courts.
On June 16, the Libyan Center for Mine Clearance and War Remnants said that landmines planted by Haftar’s militia had killed 39 civilians and injured at least 100 others, including women and children.

“More than 400,000 civilians have been displaced by the war, and many of them cannot return to their homes due to mines,” Liam Kelly, director for Libya at the Danish Demining Group, an NGO working in the country, told Anadolu Agency.

On June 20, the Libyan army announced that since June 5, some 190 bodies have been found in hospitals and mass graves in Tarhuna and areas south of the capital Tripoli.

The Libyan government has repeatedly called on the UN, the International Criminal Court (ICC), and human rights groups to demand an international investigation into the mass graves.

Earlier this week, ICC Prosecutor Fatou Bensouda said that the mass graves found so far in Libya may constitute evidence of war crimes or crimes against humanity.

The UN Human Rights Council on Monday passed a resolution ordering a fact-finding mission to Libya in order to document violations and abuses committed since 2016.

Libya has been torn by civil war since the ouster of late ruler Muammar Gaddafi in 2011. Libya’s new government was founded in 2015 under a UN-led agreement, but efforts for a long-term political settlement failed due to the military offensive by Haftar’s forces, resulting in civilian chaos.

Over 11 tons of bootleg alcohol seized in Turkey